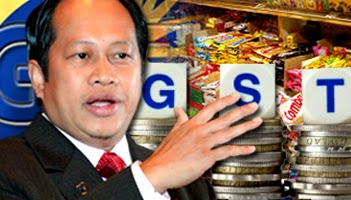 PUTRAJAYA: No demonstrations will stop the implementation of the Goods and Services Tax (GST) on April 1, said Deputy Finance Minister Ahmad Maslan.

“Come April 1, GST will replace the SST (Sales and Services Tax),” he said yesterday after visiting the KL International Airport Refund Verification Counter for foreign tourists to claim GST paid on goods bought in Malaysia under the Tourist Refund Scheme.

Gabungan Bantah GST, with help from Parti Sosialis Malaysia, demonstrated against the GST at the Federal Customs headquarters in Kelana Jaya yesterday.

Ahmad said the government was not making a mistake in deciding to introduce the GST, reports The Star Online.

“Of 193 countries in the world, 169 have already implemented the GST. It is impossible that they made a mistake.”

Only Brunei and Myanmar in the region, have yet to implement the GST.

“Protests like the one in Kelana Jaya are to be expected but they won’t stop or delay the implementation,” said Ahmad.

Foreign tourists can claim refund for up to RM300 on the GST charged and paid on goods purchased from an Approved TRS Outlet except for tobacco and tobacco products, precious metal and gemstones, wine, spirit, beer and malt liquor.

Tourists can claim GST refunds at eight airports, including the KLIA. (Free Malaysia Today)
Posted by sabahkini.net at 10:46