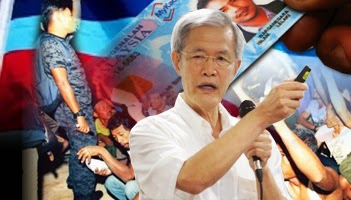 Sabah and Federal governments urged to boot out foreigners in the state before it is too late.

KOTA KINABALU: Anti-illegal immigration activist Chong Eng Leong, the author of “Lest We Forget – Issues of Sovereignty in Sabah” – thinks that the illegal immigrant menace in his nation is a bigger problem than the issue of ending the Federation with the peninsula.

“If anyone wants to break away from Malaysia, it’s the benefactors of the Projek IC in Sabah by a majority and not the locals so much,” said Chong, a former Senator, in a follow up to a public forum, “The Real Sabahans” organised by the DAP in Kuala Lumpur over the weekend.

He was expressing doubts, in a truth is stranger than fiction, that the majority of the 1.5 million locals want Sabah to “secede” from Malaysia. He sees secessionist feelings as being more of a phenomenon among the 1.7 million foreigners including illegal immigrants in the state.

“Sabah will one day be out of Malaysia, not because of the locals but foreigners,” argued Chong. “There will be a reverse takeover because the foreigners are more in number and they are on the electoral rolls.”

He skipped the issue of why the foreigners would want to turn against Putrajaya, their patrons, who gave them Malaysian personal documents and placed them on the electoral rolls. He viewed this development as one of life’s little ironies.

He urged the Sabah and Federal governments to boot out the foreigners in the state “before it was too late”. “The Sabah Government must show political will and get the illegal immigrants out even though it may not be very humanitarian to do so,” said Chong. “If you had only one pill to save a life, would you give it to a foreigner or one of your own?”

Chong, in spelling out the greater danger posed by foreigners in Sabah to Malaysia, appeared to be referring to the commonly held perception that the honeymoon between the outsiders and their patrons in Putrajaya may be coming to an end.

The issues that figure prominently among the illegals are underpayment, exceedingly long working hours and exploitation. They were also aware that the “official” documents that they held may suddenly turn out to be “unofficial” depending on which way the political wind blew. Many felt that they were “locals”. (Free Malaysia Today)