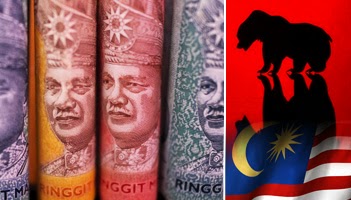 Of the 16 Asian countries tracked by JP Morgan Chase, notes from the oil-exporting nation are the only ones to decline this year, losing 1.57 per cent.

Firms in the index include Petronas (Petroliam Nasional), the state-owned energy firm, and 1Malaysia Development Bhd (1MDB), a government-backed investment firm that has been forced to dismantle amid surging debts.

Money managers from Invesco to One Asia Investment Partners cite factors ranging from a 13 per cent fall in the Malaysian ringgit in the past six months, a 44 per cent slump in oil over the same period and debt repayment concerns at 1MDB as weighing on the country’s debt.

They say the notes are not yet a buying opportunity amid sustained weakness in the currency, which on Monday shed 0.8 per cent against the US dollar.

“We’re bearish on Malaysia dollar bonds and the ringgit,” said Ken Hu, the chief investment officer for Asia-Pacific fixed income at Invesco in a report carried by the South China Morning Post.

“Most other Asian countries are energy importers benefiting from lower oil prices. Malaysia is an energy exporter.”

Oil-related industries comprise as much as 15 per cent of Malaysia’s gross domestic product, according to Moody’s Investors Service. Policymakers cut the country’s growth forecasts and budget deficit target in January in response to the drop in crude prices driven by a global supply glut.

Malaysia is the second-largest oil and natural gas producer in Southeast Asia and the world’s second-biggest exporter of liquefied natural gas, according to the US Energy Information Administration.

The ringgit slid to a six-year low against the dollar on Monday after US job data hardened speculation that the Federal Reserve would lift interest rates by June.

The yield on 10-year notes rose three basis points to 3.95 per cent, the highest since January 22. (Free Malaysia Today)
Posted by sabahkini.net at 01:52