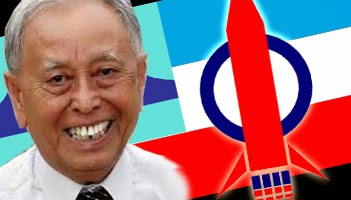 Wong, wading into the debate, has pointed out that the introduction of Islam as the official religion in Sabah was another example of the state losing its rights. The 1963 Sabah Constitution, the Malaysia Agreement 1963 (MA63), the 20/18 Points, and Batu Sumpah, pointed out Wong, all stressed that Sabah and Sarawak would have no religion.

Harris cited Wong’s attack on him as an example of the DAP Sabah Chairman “having no respect for the law”.

“He wants to mislead the people,” said Harris. “The amendment to the Sabah Constitution to make Islam the official religion was done in 1973 during the Usno Government under Mustapha Harun.”

Harris, undeterred by Wong’s attacks, stressed that a reference to the Hansard record of the Sabah Assembly sittings would show that “the 1973 amendment was supported by all Assembly members of every race and religion”.

He added that the Sabah Constitution was amended through the democratic process “and not by Harris Salleh”.

“Among the signs that religion is healthy in Sabah is the proliferation of signage highlighting places of worship other than mosques,” said Harris in diverting from the thrust of Wong’s arguments on the loss of Sabah rights.

“Politicians, especially those in the Opposition, can say what they like to confuse the people with cheap points but the facts and records will show them up for what they are,” said Harris.

Wong in his statement on Monday said, among others, that “freedom of religion” and “no religion” are two separate issues and that Sarawak “still has no religion unlike Sabah”.

“Sabah must have full autonomy under the arrangements, assurances and undertakings in 1963 between the United Kingdom, Malaya, Sabah, Sarawak and Singapore.”

Harris, who led the Berjaya Administration from 1976 to 1985, wants to join the fight for Sabah rights but his pledge comes with a caveat.

Once it is clear which key rights had been “lost” and they were shown to be “serious”, Harris swore , “he would personally join other Sabahans to fully support Pairin even to the extent of going into the jungle to fight”. (Free Malaysia Today)