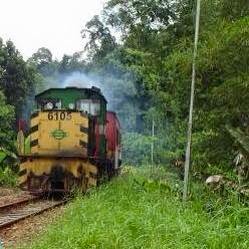 Junz said he was informed by villagers that the train accident was caused by malfunctioning of the engine. It has led to panicking accident causing passengers shocks and injuries at Rayu Train Station.

According to the villagers & passengers on board, apparently it was due to an engine failure.

The train was going downhill at a scary speed and the train conductor sent a distress signal to the Rayu Station regarding the train's situation.

Tourists who were waiting at Rayu Station after the water rafting exercises, were alerted.

The Rayu station staff workers have to put wood pieces, banana trees, railway wooden slippers in attempt to slow down or stop the speeding train but the train sped through the hurdles as it was too fast.

With the old run down railway condition, passengers were worried that the train might derail and flew into the Padas River.

Even though workers at Rayu were shouting to those onboard not to jump but due to the panicking situation, some passengers were too afraid and decided to jump off the train and sustained injuries. One jumper got his leg caught tangling with the chain and was dragged on a distance and sustained bad injury.

Villagers believed that the Railway commission has tow the train back to Tenom Station. However the extra engine parked in the Tenom station workshop is believed to be out of order too.

Thus there is no train operation at the moment.

Due to train not available, there is no sight of tourist, all works, living and tour programs are interrupted.

Junz Wong who is also ADUN LIKAS urged the problem to be fixed with sense of urgency as this affected villagers living and have caused great inconveniences to many.

He also said that the railway facilities and the trains must be well-maintained as it will endanger the lives of many everyday commuters and the tourists as well.

"I was told that none of the carriages have emergency braking or those equipped with it has broken down. We are lucky that there was no casualty at yesterday mishap. Can the relevant Minister please investigate and explain the real status and situation of the train transportation?" Junz said.

The incident was very dramatic with screams from the operator themselves to the passengers on board.

Tourists, passengers, villagers and Rayu ground crews were still recovering from the shocking experience either witnessing or personally experiencing such dramatic accident.

Junz urged Tan Sri Pairin and Datuk Radin to explain this incident and announce the steps to be taken to ensure such incidents won't happen again.

"If I were in their positions, I would be at Pangie Station now visiting the victims and addressing the matter to ensure the problem is fixed at the quickest possible time." Junz concluded