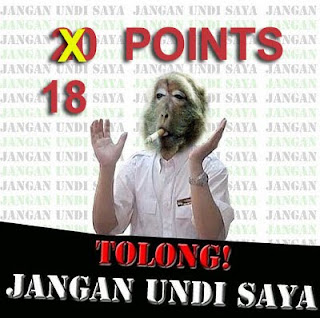 SINCE achieving independence in 1957 and the formation of Malaysia in 1963 to 1980, based on historical data and records, it is very clear that our beloved country has achieved significant progress and growth in the areas of agriculture, health, education, defence, sports, tourism, finance, manufacturing, etc. Congratulation! What about the last 30 years, from the period 1981 to 2010?

Over the last 30 years, how would you as a loyal and responsible Malaysian citizen and hopefully a registered voter, evaluate the overall performance of your respective state governments and the federal government.

In the 2008 general elections, the voter in five states decided loud and clear what they wanted: 'CHANGE'! However, this does not guarantee continuity in the coming 13th general elections. Once again the tide may change. Some call it the 'pendulum theory.'

However, as a voter, I believe one has to be objective and rational before casting your vote. We need to analyse, evaluate and decide wisely.

Before casting your vote, you may want to reflect on the following 18 points:

1. Do you feel that race relations in Malaysia has improved or deteriorated over the last 30 years?

2. Based on the Auditor-Generals report and findings, are you satisfied with the explanation given, if at all there is one, by your respective state government's and various ministries in their respective financial dealings and management?

3. Do you feel that the quality of education in Malaysia has improved or deteriorated over the last 30 years?

4. Do you feel that there is too much of excess baggage in the current political system and therefore change is imminent?

5. Security is a major concern. Do you feel that the federal government is doing enough to ensure that the citizens are feeling safe and secure within the environment they live in?

6. In reality, Malaysia has not fared well in the corruption index. Do you feel that the federal government is doing enough to combat corruption?

7. How would you rate the Malaysian health care system?

8. Is your state government and federal government doing enough to combat the social ill's?

9. What are your thoughts on the justice system in Malaysia?

10. To all Sabahan's and Sarawakian's: Are you satisfied with the infrastructure developments in your state over the last 30 years?

11. Is the federal government doing enough to promote and preserve the diverse cultures of Malaysia, particularly those of Sabah and Sarawak?

12. Is the federal government doing enough to curtail the flow of illegal immigrants into Malaysia?

13. Why is the FDI's into Malaysia at an all time low?

14. Is the Government's Transformation Programme (GTP), New Economic Model (NEM) and the 10th Malaysia Plan (2011 to 2015), the rhetoric of the politicians?

15. Lee Kuan Yew stated that 'Malaysia Is A Failed State! Do you agree or disagree?

16. Do you trust your current leader's?

17. Is the GLC's well managed and encourages investor confidence?

18. Is the federal government doing enough to revamp PDRM and the Ministry of Defence?

I strongly feel it will be wise for most of us to reflect on all the above mentioned questions or you may come up with more constructive questions of your own to reflect on . The key word I am trying to emphasise is 'CHANGE.'

In my opinion change could be looked into different angles and possibilities and not necessarily aimed at change of government or party alone. It could refer to change of a parliamentarian or state assembly representative representing his/her constituency from the same party, change of dead wood who are sitting in the various 'Living Statue’ collecting salary without work (Gaji Buta) or allowance, change of councillor's who are totally ineffective, lazy and incompetent,change in the delivery system, implementing effective management systems, etc.

The 'people' must be able to see, feel and experience this change for the better right now, not tomorrow, day after tomorrow, next month, 2020 or some year that most of the voters may not be around to enjoy the benefits.

As for Sabah, the ruling state government has some time in their hands to make these positive changes before the next general elections. However if the state leadership does not have the guts to shape up and make these critical and necessary changes I suppose the voters will have to ship the team out!