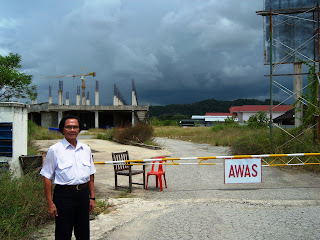 ABANDONED….The abandoned Megamall structure with Wisma Maksak at the back.

The buyers told Edward about their pain and suffering both in financial, mental and physical lost due to the non-performance and failure to deliver on the part of the developer and its contractors. Some 375 buyers who had invested their life saving, pensions and some had paid up 50% from bank loans for something still on paper drawings.

The development project land owner Majilis Kebajikan dan Rekreasi Negeri Sabah (MAKSAK) is under a joint-venture development agreement with its developer who had started work on some piling and structure work, but due to some reasons unknown, the project had stopped work during later part of 2008, and the work had not resumed until today.

The angry buyers further informed Edward and the DAP bureau members that there was a meeting arranged with the developer earlier in 2010 and they were given the assurance that the project will resume soon.

They were again slammed with another big disappointment with no work started on site. They were given many promises and assurance by the owner (MAKSAK) and the developer that the project with start soon, and it turned out to be another big empty promise. As understand, the reason was due to that there was no ‘letter of authorities’ was issued by the owner to the developer to commence work.

The buyers are keen to know why the letter cannot be issue. They pinned fault on the Board of MAKSAK for not complying for failing to deliver their promise while the developer is very keen to resume work.

Edward said that he is very puzzled on why this can happened where the Board members of MAKSAK are qualified people and they should know what they are doing professionally, so that there should be no more delay in the Megamall project.

He Further stressed that the board should take into account that the suffering, dismay, and interest of the many buyers. The buyers are giving MAKSAK until 15th of October 2010 to issue the Letter of Authorities for the developer and its contractors to start work, failing to comply they will seek legal action and report to MACC to investigate into the matter.

Edward further added that the DBKK should also intervene into matters of stop work on this huge shopping mall project and should not allow it to stand abandon like a waste land and seen as an ugly unfinished construction site. This also affects the image of the KK city as a garden city.

He also urges the MAKSAK to take action to ensure the project to resume its construction to completion without delay. The many other shopping complexes in KK City had long been completed and functioning, and why can’t the KK Megamall do the same.

As MAKSAK is under the Sabah State Secretary Datuk Sukarti, it will appropriate for them to investigate into the matter on why the project ended up the way it is now, and also should prop into the terms and condition of the joint-venture agreement and on those who approved and endorsed the said agreement.