THE TRUE COLORS OF MCA 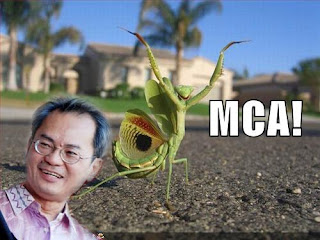 SOMEONE hides behind an anonymous name (Lovely Jin) accusing me for misleading the public about the ‘great’ history of MCA.

The writer shows a serious lack of knowledge and understanding of the role of MCA in the pre-Independence era.

Your browser may not support display of this image. The million-dollar lottery owned and operated by MCA in the pre-Independence era was granted specially by the British colonial ‘master’. All winners of lottery must join MCA as a member.

As a deal, MCA must spend some of the profits from running the lottery on the Chinese living in the new villages (under the Briggs’ plan). MCA losts the lottery concession shortly after Merdeka under the pressure of Umno. It was replaced by the state-run Welfare Lottery for some years before the former PM Tun Dr Mahathir given the exclusive right away to businessman Ananda Krishnan. Ananda changed the name of the lottery to ‘Big Sweeps’.

The Chinese were confined to various Chinese New Villages under the Briggs’ plan to curb the influence of the MCP. MCA was then granted a license to run the Million Dollar lottery by the British authority to make easy money from the Chinese community. As a deal, MCA must use part of the profit to win the hearts of the Chinese in the new villagers. This strategy worked well to serve the interest of the British master during the pre-Independence days.

When the time has come to give Independence to Malaya, the British kept its promise by working only with Umno, MCA and MIC. On the other hand, the real independence fighters including some prominent Malay Left leaders were arrested and locked up in prisons. And the war against the MCP continued with greater intensity.

But true leader like Tan Cheng Lock was sidelined by other MCA and Umno leaders in the run up to the Independence negotiations. Tan Cheng Lock has promised the Chinese community to present the General Demands of the Chinese Community to the British. When his intention was known, he was barred from attending the final round of talks in London.

The MCA was instead represented by traitors like H.S. Lee and Tahir Tan Tong Hai. According to the late Tunku Abdul Rahman (in one of his writings), Tan Tong Hai threw the entire General Demands document into a waste paper basket in the London hotel room instead of bringing it up to the negotiation table!

That’s the reason why I often tell the young people that the betrayal of MCA could be traced back to its inception. As a result of this unforgivable sell-out, Malaysian Chinese were treated like second class citizens in our land. The Chinese were now stuck with the ‘Non-Bumiputra’ label thanks to MCA.

It was people like Leong Yew Koh who instigated Tunku to strip the citizenship and teaching license of the foremost Chinese education pioneer Lim Lian Geok. Check with Cikgu Loot Ting Yee. He is one of the mother tongue education pioneers who could testify my story.

The entire history of MCA is filled with betrayals, crimes and sins. They have failed to preserve and protect the interest and rights of the Chinese community which they have claimed to represent. Take a closer look at these scandals; deposit-taking-cooperative scandals, Chang Min Thien Fund scandal, Aik Hua Holdings scandal, MCA JE Fund scandal… it’s a never-ending list.

And guess what; most of the victims of these scandals were MCA members and supporters. Mind you, it was MCA that instigated the closure of the original Bai Xiao (SJKC Damansara ) in Petaling Jaya. It was also the efforts of SOS Damansara Action Committee and the pressure mounted by DAP, Dong Jiao Zong and the entire Chinese community that brought about the unprecedented speedy construction of the new SJKC Damansara in Tropicana.

It’s a great shame that MCA leaders do not even bother to get accreditation for the certificates, diplomas and degree courses offered by TAR College. Recently, a young Malaysian Chinese boy’s application was rejected by the PDRM simply because the academic qualifications he obtained from the MCA sponsored TARC were not recognized by both Public Service Department and National Accreditation Board.

Yes, Lee Kuan Yew was not totally wrong. The Umno-led BN government has been systematically marginalized the Chinese and other Non-Malay communities. And what did MCA leaders like Ong Ka Ting and Chan Kong Choy do about it? And why were they keeping so timidly quite when Umno ultras like Hishammuddin Hussein and Khairy Jamaluddin making all sorts of racist remarks and even waved the Malay keris time and again shamelessly?

MCA is indefensible. That’s why none of the MCA leaders dare to show up for the debate in Machap. And for the same reason, none of them have the courage to rebut me on all those historical facts I raised in my book entitled, ‘Coward? Culprit? Accomplice? The role of MCA in the Chinese Community.’