WHY BLAME THE LOCALS ON ILLEGALS? 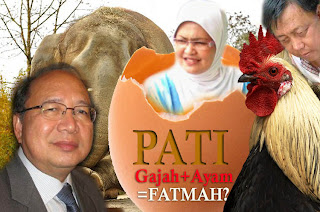 THE blame game and finger pointing has resurfaced in Sabah with the latest comment from Tan Sri Bernard Dompok in Borneo Post 19th September 2010 “Locals Also To Blame For Illegal Immigrants Problem: Dompok.”

The Minister and MP for Penampang said that locals should not solely leave the responsibility of tackling the longstanding illegal immigrants issue to the government as they are partly to blame.

Dompok said he is aware that some locals are allowing their lands be rented and farmed by illegal immigrants and opening their doors to provide shelter for them.

Dompok also said that it is something that is happening everywhere, even in his constituency Penampang. He continued, “tell me where your responsibility as a Sabahans to tackle this huge problem?”

Dompok said the government has been doing its best to tackle the problem through the setting up of special committees to study possible ways to overcome the problem. Dompok also said that as head of the Integrity Committee he was given the responsibility to study the issue. He said he has since let go the position after the officers failed to impress him with their work.

He now said that there is a special plan in which the Chief Minister Musa Aman is aware of.

Sabah DAP having studied the press statement of the Minister of Plantation Industries and Commodities Tan Sri Bernard Dompok feels that the Minister should resign as Minister and MP immediately.

This is a standard in many western countries including Japan and Korea for a person to resign if he fails to deliver. Clearly, Dompok has failed to solve the illegal problem when he was assigned as the Chairman of the Integrity Committee.

He is now blaming the officers for failing to impress him. This is absurd. The right thing to do is to remove the officers concerned and appoint more capable ones.

Dompok is ill advised when he blamed locals for assisting the resurgence of illegal immigrants. The Minister should have considered the fact that the economy in Sabah is very sluggish. The people are trying to make ends meet.

There is an opportunity to earn some money by renting out their lands so why not? Basically it is the government to be blamed for not creating a healthy business environment in Sabah. It is the fault of the UMNO-led BN government for failing to control the influx of illegal immigrants into the country.

As far as the ordinary people are concern, BN politicians and their cronies are fortunate lots and are too far from the poor-income bracket.

Sabah DAP feels that to solve the illegal immigrant problem requires a strong political will and not through committees and studies. Is the government ready and willing to take the bull by the horns?

The government should be strong enough to stop the seemingly uncontrolled border crossing immediately. The Navy and Marine Police should be able to exercise and manage this matter after been provided with all the necessary manpower, equipments and gadgets.

The government should also be committed to tackle the illegal problems within the country. We have the institutions such as the village chiefs and village security and development committees, Kapitan Cina and the town development committee, RELA, Immigrations, National Registrations and the Police to enforce the immigration laws.

The plantation and construction sectors must assist the government to manage and control foreign workers. Tackling the illegal immigrant problem is not an impossible task as Sabah is not yet heavily populated country.

Sabah DAP wants the government to limit the number of foreign workers and increase the workers’ wages so that locals will be attracted to work in Sabah rather than seeking greener pasture in Peninsular Malaysia and so forth.

All those profits earned from the plantations are useless when the country is swamped with illegal immigrants who are quickly legalized and recruited as voters by certain party. The short term political gain has a long term implication to the State.

We have to be reminded that the Philippine claim over Sabah is resurrected now and then while the grand design of Jakarta to absorb Sabah is never officially rescinded
Posted by sabahkini.net at 08:40