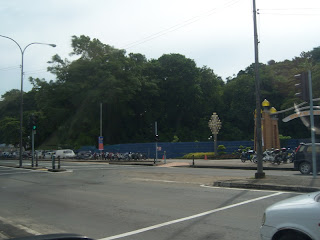 SURPRISE….View of the land proposed for 16 storey Shopping complex and hotel block by LPPB.

SABAH DAP is not in favor to the proposal to build a huge commercial building in between the KK Merdaka Padang and old clock tower which is the historical land mark. The said proposal is highly controversial due to many public objections and this will total spoiled the face look of the Kota Kinabalu City, especially it is located in the close proximity of the two prestige land mark of Kota Kinabalu, the Merdaka Padang and the historical clock tower.

Although the land is under the LPPB, the agency set up by the Sabah government to build low cost housing and commercial development for the people, the Sabah Housing commission, but such proposed development in the KK City centre is uncalled for. The Sabah state government is blamed for the approval granted earlier and now cancelled.

The state government’s decision is seen as ‘fickle minded’, and suspected to be on wrong decision made by certain quarters, or even worst it may be for the benefits of some associated colonies.

The KK folks had forwarded their views, comments and feeling to DAP saying that they wish for something different and a useful building for the benefit of the people in KK City, and DBKK should be able to help and assist.

The town and city planners should not approve any building structure that will eventually spoil and bring problems to the city like traffic congestion, flow of people, environmental impact, aesthetic effect, and most important to the need of the people. For the case of the Merdaka Padang which is usually packed with cars and buses during celebration events always caused heavy traffic congestion and obstruction to traffic flow.

Therefore a multi storey car park will be essential to solve the problem of car parking problem both in the padang and the city centre like Gaya Street and surrounding areas.

Dr. Hiew King Cheu, the KK Member of Parliament, said that it is vital and a necessity to up date and to amend all the Local government building by-laws, ordinance and the enactments regarding building and any form of related development.

This is due to the fact that nearly all our by-laws and enactments are set way back in 1961 and these are too out dated and inapplicable to the modern setting of our city and society. For example the parking spaces required under the building by-laws is no longer applicable now because of the huge increase of cars looking for parking lots.

The building set back is also different, and the old formulae will not work now due to the maximizing of land usage. The town planners and architect usually have to bend rule to suit and approval makes things not looking right.

The authorities are not keen to submit for updating and amendments to the old out dated laws to the Sabah state legislative assembly for such amendment due to the tedious and time consuming process. This must be done without delay, we can not depend on some laws that are not suitable and may bring along potential trouble to our city.

Dr. Hiew suggests DBKK to take over the said land from LPPB and to consider and to adopt the proposal made by many KK folks to build a multi-storey car park which has an environmental friendly look and will help KK city with at least 1,000 additional car parks lots, and this will bring in much revenue and income for the DBKK to further beautify KK City in the long run.