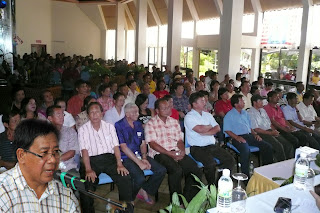 Speaking at the joint annual general meeting for branches in SAPP Liawan, Bingkor, Sook and Tambunan CLCs at the Interior Tourism Centre Restaurant in Keningau on Saturday, he said that after tonight (Saturday) the leadership is able to gauge SAPP's standing in the interior and that based on the huge turnouts from the branches of the four CLCs.

Expressing confidence that SAPP might be able to field candidates in Keningau, he urged party members to have self-confidence in order to ensure SAPP take its place as the ‘government-in-waiting’.

He also reiterated that they must prepare themselves to face the campaign tactics of Umno and BN such as the ‘bomb’ strategy.

"Umno has been using money from the beginning because that is their strategy so don't say we know about it. Because we know about it we should plan our defense," he said.

Yong said that also in conjunction with the party congress from Nov 5 to 7, SAPP would be flying its flags beginning Nov 1 until the congress ends along roads throughout Sabah ‘to tell the people that we are the government-in-waiting’.

Meanwhile, Md Noor, the former State Finance Minister who spoke in all the venues advised SAPP leaders to remain united and enhance the cordial relationship between them to ensure cohesiveness in order to achieve their target in the coming election.

Looking back at history, he said all the past governments namely Usno, Berjaya and PBS lost the elections because of disunity in those parties and the fact that people wanted a change ‘and in this 13th General Election I believe history will repeat itself once again’.

It was also heartening for him to see more youths and those from all ethnic groups attending SAPP's function and the joint AGMs in Tenom, Nabawan and Keningau.

"SAPP united multi-racial members will see to the party's victory in the coming election," he said.

"Pairin, Dompok and Kurup, they are strong leaders with high education but even them are being fooled," he said, adding that as for him he had no intention of getting any position when joining SAPP.

"I only want to fight for what is right and help correct all the wrong doings in Sabah. We may have got democracy but we lost our autonomy," he said.

Chan also hoped that the new SAPP leadership line-up after the party congress would see some re-structuring especially in better reflecting SAPP's multi-racialism.

After finishing their rounds in the interior zone, Yong and SAPP leaders went to the SAPP CLCs in South West Coast on Sunday.

Sabah Progressive Party (SAPP) entry into areas that used to be ‘restricted zone’ when it was still in the Barisan Nasional has received strong support from the people.

He said areas like Nabawan and those in the interior were off limits for SAPP, as they were told not to venture into the constituency by the BN.

"But now we don't have any more restrictions ... we can go anywhere," he said while commending the host, Maidin Othman for not only allowing the event to be held at his house but also to build SAPP Nabawan operation centre on the vacant land in near his house compound.

Before Kampung 4 Blok A in Nabawan, Yong and SAPP supreme council members were in Tenom for the Melalap and Kemabong CLCs' branches joint AGM.

Yong said there is also a possibility that SAPP may field a candidate in Nabawan depending on whether the grassroots particular party members can guarantee victory for the party.

"We ‘Fight to Win'. This means that we field our candidates in constituencies we know we will win. We don't want to place candidates just for the sake of contesting or just ‘main cincai'," he said.

Maidin also led Yong to the ground-breaking ceremony for the party's operation room that was held in accordance to the Murut customs where a white cockerel was slaughtered and Yong completed the ceremony by sprinkling the blood on the ground so that the spirit of the white cockerel would guard the land and building.

Sabah Progressive Party (SAPP) kicked off its election dry run during the weekend aimed at gauging the party's election machinery preparedness that will assist the leadership to identify the 40 state seats that SAPP will be contesting in the 13th General Election.

The marathon day for Yong and SAPP leaders began at about 11am in Tenom with the opening of SAPP Melalap and Kemabong Constituency Liaison Committees (CLCs) branches joint-annual general meeting at Perkasa Hotel.

The spirit of delegates from the two CLCs remained high although the event venue had to be moved when the organiser's booking for the district's sport complex multi-purpose hall was cancelled few days before the event .

Yong in his opening speech told the delegates that besides fulfilling the party's constitution to hold AGMs, the event was being held as a training process for old and new members so that they are kept abreast with current political situation as well as for election preparation.

He said the dry run would be for 10 days which is about the same duration from Nomination Day to Polling Day in the real General Election.

Although the present government's term will only expire in 2013, which is two and a-half years from now he believed there is a big possibility for election to be called much earlier than that.

"If they (BN) want it (General Election) to be held simultaneously with Sarawak (election) then it must be before July next year," he said, adding that a simultaneous election would give the BN advantage because the oppositions would not be able to concentrate in their campaigning in Sarawak.

He said it was also natural for the BN, especially the Prime Minister who is also the head of Umno to choose the date that benefit Umno.

"For SAPP we have to assess latest developments and political climate like what is happening in Umno ... if the share prices soared and there is a stark reduction of infighting in Umno and BN while a lot of fighting going on in the opposition camp then that is when election will be called," he said.

Since SAPP is anticipating election to be called before July next year, the party's leadership felt that it was important for members at the grassroots level to be fully prepared, he said.

The former Chief Minister said based on his experience, a political party which suddenly becomes busy one day after Parliament is dissolved is most likely to be unprepared.

"To my experience they are busy because they are not prepared since too much time were wasted in office or hotel that they have no time to turun padang and visit house-to-house," he said.

"If today dissolved all SAPP branches will know what to do particularly in facing the BN election campaign tactics," he said.

Towards this end, Yong said SAPP had put in place policies and inculcated 7 values – unity, commitment, service, credibility, discipline, perseverance and progressive – in its members mind to counter the campaign tactics of their opponent, including money politics.

"We know Umno will come to the house of voters to "bomb" them with money one or two days before polling ... but I am sure the people of Sabah cannot be easily bought over.

"SAPP's answer to this tactic is, if they come to give you RM50 or RM100 (before polling day) just take it because it is the people's money anyway.

Yong said SAPP hold steadfast to the policy of zero-money politics although he admitted that it would not be an easy task to topple the BN and its henchmen.

But, he reminded the delegates about the giant-killer feat of Datuk Kadoh Agundong who despite of not having the necessary resources but he managed to defeat not an ordinary guy but the then Berjaya government Chief Minister Datuk Harris Salleh right in Tenom.

In the past two years since SAPP left the ruling government, he disclosed that they had been studying the top 40 state constituencies for SAPP and in order for the selection to be made members in the CLCs and its branches must be prepared.

He urged members to be sincere in fighting for the party's struggle, especially when it is election time.

He also hoped there would be no more "sudden" situations such as the "vehicle's suspension spring damaged, the tyre wheel bearing missing or not enough reload (for mobile phone)" during the general election campaign.

"If the members are ready here then perhaps Kemabong or Melalap will be included in the top 40 seats for SAPP," he said.

After the official opening ceremony, SAPP members from Kemabong and Melalap also took turned to put in money into the party's donation box to help the party in its endeavour to form the next State Government.