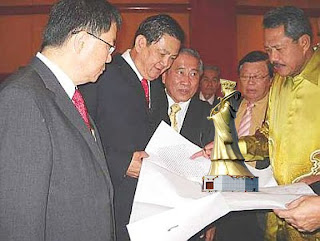 THE openness of the State Government under the leadership of Chief Minister Datuk Seri Musa Aman to grant a piece of land in Pantai Bak Bak, Kudat for the construction of the Mazu Statue has been commended by the Mazu Original Temple Management Board in China.

Federation of Sabah and FT of Labuan Hainan Association President John Lim, who led a delegation there, paid a courtesy call on Musa at Sri Gaya, Wednesday. They briefed the Chief Minister on the progress of the project following the visit to Meizhou Island, China recently.

"They said the spirit of love and charity of Mazu will continue to prosper and extend throughout the State of Sabah if there is such an open-minded leader," said Lim. The Federation together with Malaysia Hainan Association led a 30-member delegation to visit the Mazu Original Temple in Meizhou Island from Sept 7 to 13.

According to Lim, the purpose of the trip was to receive guidance and blessing from the Mazu Original Temple.

Lim said the Mazu Original Temple Management Board Senior Secretary, Zuang Mei Hua, also believed that the construction of the Mazu Statue would not only receive support from the Chinese community in this country but also from all over the world.

Apart from that, it was the responsibility of the Original Temple Management Board to provide assistance and fully support the construction.

Lim said that the Federation received a lot of calls from the Hainanese and Chinese community when they first heard about the land approval by the State Government for the Mazu Statue construction.

On another note, he said that after visiting the Mazu Original Temple they now realised that the construction cost would be huge and are, therefore, appealing for financial assistance from the State Government.

Besides that, he said they would also be calling for assistance from the Chinese community and other associations so that the Mazu Temple could be constructed as planned.

Meanwhile, Musa said the Government would support and provide assistance to the best of its ability to the endeavour.

"The Barisan Nasional Government is an open, accepting and caring Government.

I believe the construction of the Mazu Statue will not only benefit the people of Sabah but also those from beyond our shores," he said. Also on hand was Resource Development and Information Technology Minister, Datuk Dr Yee Moh Chai.