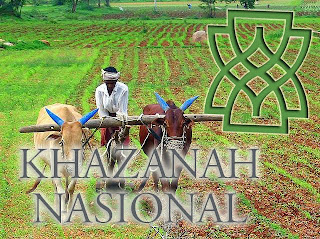 Tun Dr Mahathir raised the issue of Khazanah’s failed (I would say criminally negligent) investment in some far fetched, hairy fairy tuna wrangling venture. They are believed to have lost about RM120.0 million of taxpayers money (at the very least) in that venture. The tuna boats are not catching any tuna now. They are catching the wind in Langkawi.

One source tells me that among the things that happened was that Khazanah paid RM6.0 million for a second hand tuna fishing boat whose market value may have been about RM2.0 million. Someone made money lah.

Khazanah is living up to the GLC tradition of losing taxpayers money by the hundreds of millions of Ringgit. That is why I keep saying GLC means Government Losing Concern.

What I am really surprised about is that despite so much of their screwing around coming to light and so much of their crap hitting the fan, no one seems to take any action. Nothing is happening. No heads have rolled, no one has even been fired. Its simply “lets lose some more money” as usual.

A commentor on my Blog said “Buat jalan kat India jahanam duit rakyat dekat 800 juta. Buat hiway kat Doha, jahanam duit rakyat 1.8 billion.” Sounds like someone in the know. He is of course referring to our GLCs who have been snookered in these weird places (where even seasoned MNCs tread lightly).

Let me give our GLCs some free but very valuable advice : stay away from any Asian and African country from east of the Myanmar border until the Atlantic Ocean. These are not places where you want to risk hundreds of millions of Ringgit (especially taxpayers funds). I am not being racist or prejudiced. This is simple business sense and there is a reason to it. These countries do not yet have advanced ‘business practises’, social systems, legal systems or legislative systems.

A lot of them are still dependent on the bazaar economy – trading and commerce that runs on things like tribe, race, caste, language group and religious affiliation. International business practices or even standard business practices are lacking. This is why those people who really insist on doing business in these places go there in their aircraft carriers, M1 Abrams tanks and Apache gunships. They use a big stick. Sebab law and order kurang sikit.

A carefully crafted legal document or contract drafted by the best legal brains is just so much paper. I still recall the two Malaysian Chinese guys who were prevented from leaving Saudi Arabia over some business hitch. Are these things captured in the contracts? These are the kind of countries where if there is a civil suit, they can prevent you from leaving the country.

Folks say that Sime Darby’s project team in Dubai used to hire heavy duty cranes costing tens of thousands of US Dollars PER DAY but without negotiating for the crane driver to operate the equipment. Of course the local Arab supplier would bugger them properly before finding a crane driver in a hurry. These folks have had this type of cut throat bazaar mentality for centuries. You can only cut someone’s throat once. There is no more repeat business. That is why they are poor and they cannot prosper themselves in a hurry.

And in an environment like this, our greenhorn GLC boys who may not even fathom proper English, want to go and spend hundreds of millions of our taxpayers Ringgit. Hence enter the “con-sultans” too.

Some of you may have read this already. I am relying on The Star. Khazanah has “lost” (or rather they have spent it) hundreds of millions to a pair of Indian “greenmailers”. Yes that’s how I see it.

Greenmail is the corporate version of blackmail. Smart beggars with tons of money in their pockets take up strategic stakes in target companies (public listed) that are known to have significant importance for another large shareholder (like Khazanah).

Once they get a strategic stake they do things like demand management control, change the Board of Directors, threaten to change the target company’s direction etc. The idea is to frighten the other major shareholders (eg Khazanah).

If they play their cards right, the other major shareholders will panic and then offer to buy out the greenmailers at a much higher premium. The greenmailers walk off with a pretty pile of cash. This is exactly what happened to Khazanah Nasional Bhd.

By The Star’s opening paragraph, Khazanah has been dented by a whopping RM935 Million (S$400 Million). That’s our money folk. Let me summarise the whole thing.

Khazanah had a 24% stake in Parkway Holdings, a Singapore listed company that runs health care facilities (hospitals lah). Despite holding a 24% stake, Khazanah has not taken over management control (for err say five years now). Khazanah did not even take control of the Board. They let the Singaporeans run the business for them. This was an Ali Baba situation. For a long time, Khazanah also has very Singapore friendly folks working on the inside.

Then in March this year two Punjabi brothers from India appeared on the scene. They also bought about 24% in Parkway. Immediately they appointed four Directors to the Board, including the Chairman and the Managing Director. They say that these Indians are long term hospital players. They are indeed hospital players but their quick exit from Parkway (hundreds of millions of Ringgit richer) does not suggest they were long term players.

Surprisingly it was Khazanah’s trusted Ali Baba friends in Singapore who sold the strategic stake to the two Indians. Not only that but Directors associated with the trusted Ali Babas entered into contractual pacts (all legal and proper of course) with the Indians which gave the Indians control of the Board of Directors. Khazanah the groom was left outside the bridal chamber holding the best man’s pants. I think Khazanah got snookered by the Singaporeans.

With much regret, sorrow in their hearts and a heavy feeling inside their turbans the two Indian brothers accepted Khazanah's S$3.95 offer price. In just four short months the Indians had made S$0.39 per share, resulting in a net gain of S$117.0 million (RM274.0 million) for the Indians.

The KTM land deal in Singapore is becoming a fiasco. Khazanah is involved. Recall Aman Resorts? Khazanah was involved in talks to buy these resorts from another Indian fellow for a cool RM1.1 Billion. Khazanah has denied that deal but the Singaporeans were also in the background, sniffing the deal. Often, wherever Khazanah goes, the Singaporeans are also there. Why?

Recall the Pantai Hospital – Parkway fiasco during the time of Slumberjack? Again Khazanah was snookered by the Singaporeans in that deal too. For a quick summary of that debacle, read Rocky’s Bru here .

Next on the radar : how are Khazanah’s RM150.0 million investment in that Oriental University City (OUC) in China? Folks say Khazanah overpaid for the asset – buying 10 percent stake in t he Chinese university from Singapore’s Raffles Education Corp, at a price/earnings multiple of 58 times and eight times book value. Again Khazanah has been snookered by Singaporeans. How are the Ah Moi’s grades?

How about that couple of hundred million Ringgit Khazanah invested in that udang farm in Setiu, Terengganu? Udang dah jadi ke? Or that ‘corporate scale’ papaya farm in Pahang? What is happening to all these hundreds of millions of Ringgit?

I have suggested earlier that Khazanah Nasional Berhad be wound up. May I suggest now that the MACC also investigate their spending such huge quantities of money and incurring such huge cash losses (to differentiate from year end audited accounts – he he he saya pun tahu trick ok).

They spend in excess of RM400 million on ‘con-sultans’ alone. Some folks say this is money spent on management con-sultans alone, not including other professional consultants like project engineers, EIA consultants, surveyors, architects etc. That is a separate bill by itself.

Things are just not right at Khazanah Nasional Bhd. We need to dig out what is really going on. If thievery has been going on, or there is gross negligence and incompetence, lets call the gedebeh. Hand chopping time. Maybe its time for Syariah law.