PM HAS NOTHING TO OFFER? 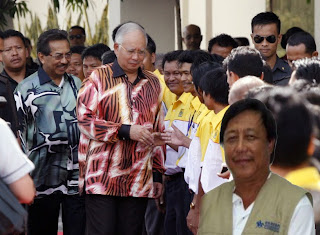 THIS year, 16th September was historical when after 47 years the BN Federal Government finally accepted 16th September as Malaysia Day. Sabah was chosen to be the venue of the first Malaysia Day celebration. Prime Minister Dato Seri Najib Tun Razak celebrated Malaysia Day in Sandakan and Kota Kinabalu. It appears that he came in empty handed and leaving Sabah and the people of Sabah empty handed.

The mood of this 47th Malaysia Day is one of disappointment for the people of Sabah in particular. If we take raising the ‘Jalur Gemilang’ or national flag as an indicator, we can see that only government and major companies were raising the flags. The absence of the Yang Di-Pertuan Agong, Sultans, Yang Di-Pertua Negeri, Chief Ministers/Menteri Besar, Federal Cabinet Ministers and foreign dignitaries is in the minds and lips of all Sabahans.

In Sandakan Najib and Musa drank the 1Malaysia milk together with UMNO and BN leaders and school children and later signed the official Malaysia Day celebration book in Kota Kinabalu. The Prime Minister has this to say, “what has been bonded must never break”.

Najib wants the people in Sabah wherever they may be and from various races, religions and cultures to feel that UMNO and BN is a people’s champion party that fights for the people. He said we have seen Sabah grow under the leadership of Chief Minister Datuk Musa Aman and the State government.

Unfortunately, Najib continues to be lost in history. He said August 31 marks independence to us all and September 16 is a date where a nation was formed. Our Prime Minister is also off the mark when he said 80% of Sabahans and Sarawakians agreed to gain independence through Malaysia.

It has been reported that one-third of the people in Sabah agreed to join the Federation of Malaysia, the other third disagreed while another third was undecided. Sadly, the 5-member Cobbold Commission which was tasked to get the feelings of the people did not include any representatives from North Borneo and Sarawak.

The Prime Minister took time to talk about the RM6.1 billion allocation from the Federal Government. Sabah DAP would like to warn Sabahans that this pledge on the RM6.1 billion could be just another pledge. We are tuned to think that there is lots of money in Sabah but the level of infrastructure development is so poor to say otherwise.

There are so many delayed projects while others have been abandoned. Sabah DAP would also like to advise the government not to implement project for the sake of getting projects.

The protest against the coal-fired power plant, dams in Kaiduan Penampang and Tambatuon Kadamaian is good indicators of the people feeling toward the government’s development plans.

The only tangible offer from the Prime Minister during this visit was his hope to see more Sabahans head federal departments not only in the State but also at the central level.

It is inconceivable for our Prime Minister to talk about borneonization of the civil service upon reading an article by a frustrated Sabahan in the local newspapers by chance. It tells us how ignorant our Prime Minister is on the 20-points and the feelings of the people in Sabah.

While many of the 20-points of safeguards have been eroded, there is a deliberate attempt to decelerate the borneonization of the civil service, one of the agendas in the 20-points. Sabah DAP would like to remind the Prime Minister that the Kadazans (comprising the various ethnic tribes) which represents about 50% and the largest ethnic group in 1963 must be given due consideration in the process of implementing the borneonization exercise.

Sabah DAP would like to see more Kadazans holding more strategic and important posts at State level and should be considered for positions as Ambassadors, High Commissions, Judges and Directors in Government-linked companies such as Petronas and EPF at the National level.