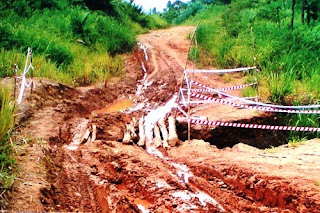 SABAH DAP claimed that the bad interior roads in Sabah contributed to many fatal accidents and loss of lives as appeared in the news headlines in Sabah. Despite of the Barisan National election pledges to address the problems in building better road infrastructure in Sabah, particularly in the interior, it seem that there had never been fulfilled for so long.

The people were frustrated and disappointed that the interior road conditions had never been improved. Sabah DAP received many public complaints and protests from the rural communities against the local authorities for ignoring and failure to repair and maintain the many networks of bad interior roads that affected the people, especially the rural residents who depended on road transportation and frequent travelling from one towns to another, and from their villages to places of work and market places in the interior.

They had to endure the bumpy, dusty and bad road conditions that often damaged their cars and vehicles. Besides the potholed roads filled with rain water had made driving troublesome and perilous in the rural areas. During rainy season and heavy showers, it made it very difficult for commuters and vehicles to travel in the badly battered road conditions with potholes and slush that slowed down all types of vehicles while affecting the fuel consumption and caused frequent accidents.

In Keningau, the typical examples of bad road conditions are found at Ulu Patikang, Keningau and the gravel roads leading to Kampung Kuangoh, Bingkor and several villages that had been grossly neglected for decades. The remote areas of Melalap and Kemabong in Tenom Constituency were also not spared with bad interior roads that needed urgent attention and actions by JKR.

Sabah DAP questioned JKR for failure in maintaining and upgrading the interior roads that were situated within just a few kilometers from Keningau township. Sabah DAP urged the Government and the Member of Parliament for Keningau to fulfill their past Election promises and take immediate actions to improve the bad road infrastructure for the rural communities. If the BN Government cannot keep their promises, then it is time to make a change, which is to change the Government.