CASINO IN THE 2ND POOREST STATE 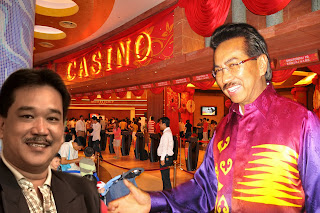 Musa Aman must explain to Malaysians in Sabah that "Has the State Government of Sabah given the ‘Approval’ for the go-ahead of a CASINO? If Musa Aman has given the nod for this Casino, when and why was it APPROVED?"

During the ETP open day yesterday, the Performance Management and Delivery Unit (Pemandu) revealed that the government was considering building a 500-acre ‘eco-nature’ resort in Sabah, as part of a concerted effort to push Malaysia onto the integrated resort (IR) bandwagon and that the option to build a casino is on the table for the Karambunai IR, alongside a mangrove centre, water theme park and waterfront properties to ensure a higher return on investment (ROI).

“We want the Musa Aman Administration to come out clean and explain whether they have given any approval or are contemplating building a casino in Sabah. Even though there has been no official admission from the Barisan Nasional (BN) government, the facts allude to the strong case where a casino will be built, under the guise of ensuring a higher ROI. All points lead to the fact that a casino will be established. Can our honorable Chief Minister Datuk Musa Aman confirm or deny this?” said Klassen

Klassen further stressed that the proposal to build a casino showed how the present government administration is intent on ‘popularizing gambling’ in the country, barely months after the huge outcry over Tan Sri Vincent Tan’s abortive attempt to introduce football betting.

Local council state laws in Sabah,requires a company to apply for a "trading license" to do any form of business,and trading licenses are issued by the the respective District Councils,Municipal Councils or City Hall.The Federal Treasury through the approval from the Federal Cabinet may Approve such a CASINO license, but without the issuance of a trading licence, such a CASINO will not be able to operate even with the approval from the Prime Minister himself,.stress Ronnie.

If the Federal Cabinet had tabled and Approved for a CASINO in Sabah, that would imply that the Minister's from Sabah namely, Tan Sri Bernard Dompok, Datuk Maximus Ongkili, Datuk Shafie Apdal and Datuk Anifah Aman had given their consent.

Did these ‘honourable’ Minister's take into account the social and moral implications, that would affect Sabahans or where they blinded by greed?

“We demand a full explanation from Musa Aman,where is the transparency,credibility and accountability which the UMNO/BN Government of Sabah being boasting all these while?” said Ronnie.

The Pakatan Rakyat Government would never agree to a project that has social ills and worst off bankrupt the people. We will not allow, Ah Longs, illegal money lenders or bonafide banks a field day to destroy family's through gambling.

“As it is, the slot machine clubs in Sabah has brought disaster to many family's,many of which now suffered broken families and debts all in the name of gambling,”.said Ronnie.