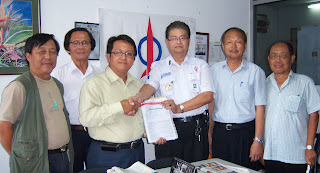 To head the Tenom Parliamentary Liaison branch is Dr. Benjamin Yap, who is well known in the area and has been working hard in the interior for many months with DAP now. He is also been appointed as the Chief-in-charge of the Interior which includes the areas under Tenom and Keningau.

Dr. Benjamin Yap said Sabah DAP is happy to receive the support and recognition from the people in the interior and pledged to work harder to bring out and to high light their problems to the authorities concerned.

The interior of Sabah has always been forgotten and neglected by the BN government in their development like infrastructures, industries, agriculture, social and welfare, and these are the areas where there are plenty of hard core poor folks. Just ask what had the BN done in the past to bring prosperity to Tenom and Keningau?

These places used to be booming and full of lively activities during the days of the timber industries peak time, and now it is totally reduced to almost zero. The worst hit is from the severe cut in the funding on the Sabah Development Corridor as announced. Are the people in the interior the ‘third class citizens’ who doesn’t deserve the equal rights as any one else in Malaysia? What is the use to continue the BN government who does not care for the people here?

We the DAPs will serve well under the capable leadership of Dr. Benjamin Yap and his hard working committee members and party members together. There will be plenty of work to be carried out especially into the rural areas where Dr. Benjamin and his mobile service team will have to walk for miles to reach.

The setting up of the Tenom Mobile service team had been in operation and had performed successfully in many areas to listen and look into the complaints of the people, and at the same time Dr. Benjamin has been appointed by the SPR (Election Commission) as an assistant registrar on behalf of the SPR to register eligible young voters who has reached 21 of age.

Sabah DAP is at the moment assisting the SPR with 32 assistant registrars to carry out the young voter registration all over Sabah, including the remote districts. DAP in Malaysia has assisted SPR in registering new voters with the highest number in the country of some 55,000 people as now, and UMNO is only the second on the list.

There is still many young people (two hundred thousand or more) in Sabah especially those in the interiors did not register themselves as voters. It is their rights to be a voter to vote for their righteous future new government.