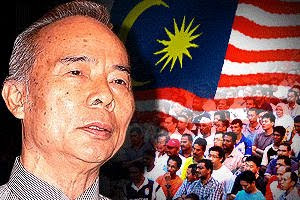 The committee could particularly help determine whether the judiciary has been acting ‘impartially and courageously’ when interpreting the federal constitution, he said.

The committee should confine itself to matters that affect Sabah, he added. "The effect could be either direct or indirect."

"We know that amendments to the Federal Constitution that affect Sabah need the consent of the governor," said Sipaun, who is an advisor to the Malaysian Anti-Corruption Commission (MACC).

"However, we don't know whether such consent has indeed been obtained."

The former Sabah state secretary, and just retired Malaysian Human Rights Commission (Suhakam) Vice-Chairperson, was elaborating on his remarks as panel chairman at a public forum last weekend in Kota Kinabalu on the Federal Constitution.

The forum was part of the on-going nationwide MyConstitution campaign launched last November 13 by the Bar Council's Constitutional Law Committee. The committee wants to reach out to six million households with its 'simplify the constitution' theme.

Sipaun held that the public's concern over the role of the governor was particularly important as the constitution has, by all accounts, been amended numerous times.

'Governor's consent has to be in writing'

Sipaun further held that such consent has to be in writing (as proof) but he can't vouch, even as a former state secretary, whether this is in fact the case.

His own reading is that although the governor acts on the advice of the state cabinet, ‘it's a mere formality’. One difficulty is that the public have no access to the files and documents on amendments to the Federal Constitution, noted Sipaun.

"In this case maybe it's a good idea. I would if I was in the state government to form a committee to review, inquire and monitor what actually happened," he said.

"This is particularly important when the same party runs the federal and state governments."

He further held that if the state government did not agree to the establishment of the special committee, it was immaterial, implying that it could be an NGO initiative.

Under law reform, the special committee could study, for example, whether the Native Customary Rights (NCR) law enacted in 1968, needs to be reviewed and amended "because at the moment it requires the applicant to list down things like the number of trees planted, etc".

"Imagine going around counting the number of trees," said Sipaun. "What's important is that you can produce evidence that you have been on that land for more than three years, for example."

He disclosed that land matters were the main complaints received from rural folk when he was with Suhakam.

The most common one was that when settlers applied for their own land to be registered legally and titles issued, they either did not receive a reply, often the case, or had their application rejected outright by the state government without any reasons cited.

What made matters worse and brought in politics was that the same land was later approved to people who don't actually need the land, he charged, "resulting in the original settlers being chased out by the authorities to become internally displaced people or refugees in their own land".

United PasokMomogun KadazanDusunMurut Organisation (Upko) secretary-general Wilfred Madius Tangau agrees that there's a need for people in Sabah to study in-depth the process of amendments to the federal constitution from 1963.

This is particularly true of Sabah rights, NCR and immigration among the 20 Points," he said. "Amendments to Article 1 (2) of the federal constitution in 1973 convey the impression that the special rights of Sabah and Sarawak have disappeared overnight at the stroke of the pen."

He is by no means certain that the amendment obtained the consent of the governors of Sabah and Sarawak. In the absence of obtaining such consent, in writing, the amendments don't exist, he stressed. "There's no two ways about it."

Another issue to be ironed out, according to Tangau, is the fact that the various ethnic groups in Sabah are not mentioned in the federal constitution which however makes reference to ethnic groups which are indigenous to the Philippines.

Other participants at the forum have their unique takes on the MyConstitution campaign and the federal constitution.

'The story of the constitution of two federations'

"The states of Sabah and Sarawak are two distinct regions as defined under the constitution."

Dompok said a study of the Malaysian constitution would show that the provisions themselves show the country as composed of three distinct parts; Sabah, Sarawak, and the peninsula and this has been expressed in continuing political rhetoric and polemics.

The official recognition of Sept 16 as Malaysia Day by the federal government after 47 years, "is an acknowledgement that Malaysia is one nation, three territories," Dompok pointed out. "This is something to celebrate every year separate from Independence Day which falls on Aug 31 for not only peninsular Malaysia but Sabah and Sarawak as well."

'Only some of the 20 Points absorbed into law'

Commenting on Sipaun's call for a special committee on the federal constitution, Dompok held that only some of the 20 Points under which Sabah helped form the Federation of Malaysia have been absorbed into the supreme law of the law.

Dompok said that some of the others, for example Borneonisation of the federal civil service in Sabah and Sarawak, "are matters of administration for the Public Services Department to work out".

He does not see the need for a Royal Commission of Inquiry (RCI) on the 20 Points as suggested by Democratic Action Party (DAP) advisor Lim Kit Siang (right) in Kota Kinabalu on Malaysia Day, Sept 16.

Lim wants the RCI "to assess the success, shortfalls and failures so that all the 20 Points can be fully implemented" as provided for by the Malaysia Agreement.

The MyConstitution campaign in Sabah has seen the launch of Phase 7 of the 'Rakyat Guide' booklet on Sabah and Sarawak. The booklet, which is being made widely available, is to enable the public to understand the Constitution.

It is written in straightforward and simple easy-to-understand language which translates everything into laymen's terms.