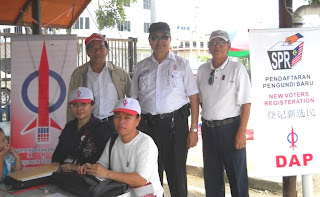 While doing the registration, Sabah DAP interior received many public complaints from the local communities in Tenom with regard to PPRT, flood problems, lack of low-cost housing, welfare and inadequate public utilities, amenities and even bad road conditions in the remote areas of Tenom, Kemabong and Melalap.

Since the formation of Malaysia 47 years ago, the Government again and again has announced to develop the interior area and look after the needs of the people concerned, but these declarations and commitments had failed.

“We can see that the condition of infrastructure, roads in interior area such as Keningau and Tenam was not much improve compared to 47 year ago. BN government, the State of Sabah and has constant to development Sabah, yet what we see now is that Sabah for a rich state become the poorest state in Malaysia,” said Benjamin.

Furthermore the rich resources originally belonged to Sabah, now only be given 5%, and the remaining belong to West Malaysia. Therefore, it is time to change, and only change of government, the interior area can be development socially and financially.