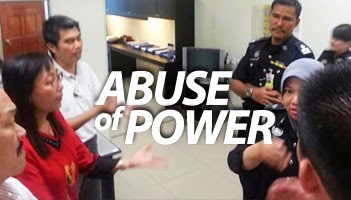 KOTA KINABALU: Seputeh member of parliament Teresa Kok was barred from entering Sabah by the immigration when she landed in the Sandakan airport yesterday afternoon.

Sandakan member of parliament Stephen Wong was at the airport to receive Kok but was not been allowed to meet her.

“I am utterly disgusted and shocked on hearing news that DAP national vice chairman, Teresa Kok, was banned from entering Sabah today (yesterday),” said Wong in a statement yesterday.

According to him, Kok was scheduled to attend and witness the installation of DAP Sandakan Wanita wing last night.

When she touched down at Sandakan airport, she was told that she was banned from entering Sabah by an immigration officer and was asked to return to Kuala Lumpur immediately without further negotiation.

“I am disappointed at the treatment meted to Teresa Kok by the Barisan Nasional Sabah government. Is she a terrorist and committing crime in Sabah? This is a blatant case of political suppression on her and denying her rights as a Malaysian citizen,” Wong said.

“Although we agree that Sabah has autonomy on immigration as promised in the 20 points and the Constitution, it should not be used as a political tool to suppress any opposition leader. She has not undertaken any illegal practice in Sabah!” he added.

“I demand the Sabah state government to explain why this had happened? I also demand the Sabah immigration unit to reveal the name list of banned politicians, especially those from opposition party, immediately,” he said.

Wong also said that DAP Sabah wants the Sabah state government to remove Kok and other political leaders from the blacklist and respect the spirit of law behind the Constitution.
Posted by sabahkini.net at 18:26