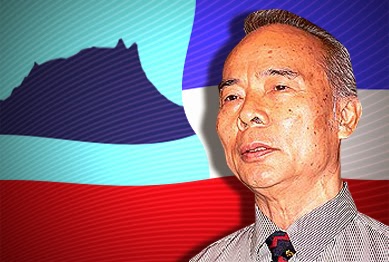 For a start, Malayans must no longer flood Sabah and fill up posts in Federal departments in the state.

KOTA KINABALU: Former Sabah Secretary, Simon Sipaun, has called for the Federal Constitution to be brought in line with the Malaysia Agreement 1963 (MA63) to end the unhappiness in Borneo with Malaysia.

The Federation, he added, had turned out to be something that the people had not expected. “Much time has been lost during the last 51 years.”

“The problem between the peninsula and Borneo may be the different perceptions between them on Malaysia,” said Sipaun. “We thought we were going to form a new nation. It’s easy to get confused because we inherited Malaya’s flag, their national anthem and their constitution, among others.”

“They (the peninsula) claim that we joined them.”

He was commenting, on the sidelines of a forum in Kota Kinabalu, on Penampang MP Darell Leiking disclosing that he (Darell) was among the many who signed the SSKM (Sabah Sarawak Keluar Malaysia) petition calling for a review of the 20/18 Points.

A new nation, conceded Sipaun, should have a new constitution, a new national anthem and a new flag, “not merely ‘transplant’ Malaya’s and call it Malaysia”.

Malaysia, nevertheless, can still have a bright future, he believes. “It all depends on the type of leadership we will be getting,” said Sipaun. “I still hope that the Government would be fair and clean and not misuse resources and assets.”

For a start, he said, Malayans must no longer flood Sabah and fill up posts in Federal departments in the state. “They have been doing this for the last half century and it must stop. There must be Borneonisation as pledged in 1963. We can’t have Malayans replacing the British.”
Posted by sabahkini.net at 11:35