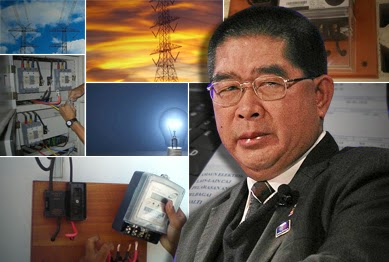 ADUN LIKAS Junz Wong was not impressed with the announcement by Energy, Green Technology and Water Minister Datuk Seri Dr Maximus Ongkili that there would be no power tariff hike this year.

"Firstly, even the petrol & diesel prices have dropped due to falling oil price thus it's not good enough to tell the people of Sabah that there will be no power tariff hike.

Power tariff should be reviewed lower as It literally means that the overall operating costs of SESB have dropped.

I demand SESB to come clean on the impact of falling oil prices on its operational costs." Junz emphasized

Secondly ever since the last increment of power tariff in Sabah, general Sabahans have experienced a hike of at least 25% - 40% more expensive electricity bills.

Junz Wong who is also DAP Sabah Organizing Secretary said he was disgusted with SESB efforts to justify the rise of power tariff.

"SESB dare not even respond to our questions publicly thus he would be bringing this matter to State Assembly for debate." Junz claimed

He called on Dr Maximus to demand SESB to publicly declare the total amount collected since the 16.7% increment of power tariff and the replacement of new meet reader system.

"What's the total accumulated figure over the one last year and how much more was collected since the tariff increase?
Why SESB, being the sole electricity power provider, who has the social responsibility & duty to public, won't reveal this figure?" Junz asked

"If indeed SESB has collected more than 16.7% in total from general Sabahans, SESB should reduce the power electricity tariff immediately without delay!"

SESB should also announce publicly that total amount of collection from capital contribution which is believed to be one of the main contributors to high property prices in Sabah.
Posted by sabahkini.net at 12:15