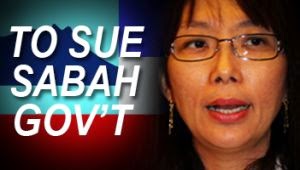 Her presence in Sabah was for the purpose of legitimate and lawful political and social activities.

KUALA LUMPUR: Newly-“banned” Seputeh MP Teresa Kok plans to sue the Sabah Government for denying her entry into the state at Sandakan Airport last Wednesday February 4 at 3 pm. She was put on the same plane back to Kuala Lumpur, her last port of call, at 3.30pm.

Teresa has reportedly taken advice from her lawyer SN Nair,  to file a suit against the Sabah Government on the matter’.

It does not clear where the suit will be filed. The High Court of Malaya has no jurisdiction on such cases and neither can Nair represent her, except with permission, if the suit is filed in the High Court of Borneo in Kota Kinabalu.

Teresa maintained, in the statement, that her presence in Sabah has always been for the purpose of legitimate and lawful political and social activities.

“This is commensurate with my position as a Member of Parliament,” she added.

“By denying me entry, they (Barisan Nasional Sabah) hope to tie the DAP’s hands in seeking political change.”

The 'ban' on her, she speculates, has much to do with DAP leaders in the peninsula coming to Sabah.

“There appears to be much fear in the BN that the Opposition in Sabah is slowly but surely gaining political traction as a result of these visits.”

The 'ban' by the authorities, she continued, “clearly reeks of surreptitious political motives to stymie my legitimate opposition political activities in Sabah”.

Teresa, in an earlier statement, had decried that she was never given the reason why she had been denied entry. She was visiting Sabah to officiate at a DAP Wanita function.

The grapevine has it that the “real” reason Teresa was denied entry, possibly even banned and placed on the blacklist, was because Gerakan is worried that their Tanjung Papat and Elopura state seats are at risk of falling into the hands of the DAP. Teresa, it’s said, has been particularly active in these areas and is considered hugely popular among the womenfolk.

The immediate reason, and one politically expedient, may be her intended presence at the DAP Wanita function.

The 'official' reason, but never cited, may be one or two statements on Sabah attributed to her. It’s not known what these offensive statements were but whatever they are, they appear to be on record, as having rubbed the authorities the wrong way.
Posted by sabahkini.net at 09:21