ANIFAH VOICE OUT HUMANITY IN UNGA 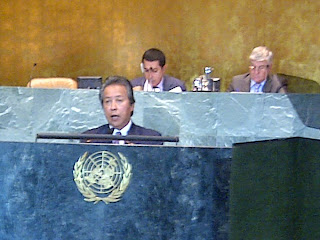 I WOULD like to take this opportunity to congratulate you, Mr. President, on your election as the President of the 66th Session of the United Nations General Assembly (UNGA). I have no doubts that under your able leadership, the Assembly would be able to complete its deliberations and proceedings successfully.

In this respect, I wish to assure you of Malaysia’s full support for your Presidency. Permit me also to offer our congratulations to His Excellency Ban Ki-moon on his re-election as the Secretary General.

The theme that you have chosen for your presidency namely ‘The Role of Mediation in the Settlement of Disputes’ is apt, fitting and timely. Indeed, the United Nations itself was established as an instrument of mediation, to promote peace, security and stability among the nations of the world. Many in this august body have spoken about the importance of settling disputes through mediation. Malaysia shares this view.

In the final analysis, peace can only be achieved if people are willing to engage in mediation. Now more than ever before, mediation must be made to work in the Middle East crisis.

In a turbulent neighborhood, mediation is the only answer for people to live in peace and security. Through mediation, we can determine what the security concerns of people are and take appropriate measures.

As such, all of us have a role in ensuring that it is effective. Patience and prudence have its merits, but patience and prudence must not result in paralysis. This august body, and the Security Council, has adopted numerous resolutions on Palestine.

Yet there has been no tangible outcome. We must act, we must act decisively and we must act now. Malaysia on our part will act by wholeheartedly supporting Palestine’s bid for statehood and full membership of the UN. Malaysia calls on other member states to act likewise.

For some time now, our world has been battered by unprecedented political challenges, devastating national calamities and financial crises. During this time, our institutions and mechanisms seem incapable of handling these challenges and the pace at which they surface.

To compound the situation, while we address long-standing causes of international instability, non-traditional threats to peace and security, such as terrorism, poses additional challenges.

As we share the grief of those who have lost their loved ones during the 9/11 attack exactly ten years ago, we must strengthen our resolve to eradicate terrorism in all its forms and manifestations. This can only be achieved if we address the root causes of terrorism.

This would deny sympathy and support for those committing acts of terrorism. We must at the same time win the hearts and minds of the people to ensure that our fight against terrorism will not be short-lived.

But the winning of hearts and minds is just half of what I would call `The Battle of Perceptions’. The other half consists of combating expressions of extremist sentiments. Despite our continuing efforts to promote world peace and harmony, we still witness the increasing trend to perpetuate and fuel Islamophobia.

There have been attempts to pit Islam against the West, demonize Islam, as well as link Islam with terrorism. These irresponsible acts further intensify the divide between the broader Muslim world and the West.

The real issue is not between Muslims and non-Muslims but between the moderates and extremists in all religions, be it Islam, Christianity or Judaism. It is in light of the growing tide of extremist sentiments around the globe that the Honourable Prime Minister of Malaysia called for the creation of a ‘Global Movement of the Moderates’ at this august assembly last year.

This is a clarion call that has come at the right moment in history. We must ensure that the voices of moderation, which currently constitute the silent majority, prevail over that of extremism in finding solutions to the growing challenges that the international community faces.

There has been wide acceptance of this movement at the highest levels of global political leadership such as by the Asia-Europe Meeting as well as the East Asia Summit.

More recently, ASEAN has endorsed the movement of the moderates as its contribution to global developments. Malaysia will work diligently to ensure that the Global Movement of the Moderates will complement the ongoing activities of the UN Alliance of Civilization, and other inter-cultural and inter-faith dialogues so that moderation triumphs over extremism.

We cannot turn a blind eye to the needs of States that are severely affected by natural calamities. The situation in Somalia has touched the hearts of many. For our own part, Malaysia last month pledged a sum of USD 1 million to the OIC Trust Fund on Somalia and dispatched a humanitarian mission to mitigate the sufferings of our Somali brothers and sisters.

A valiant Malaysian son lost his life carrying out this mission. However, such incidents will never deter us from continuing to provide humanitarian assistance to other countries in need.

In the field of environment, we seem to be losing focus. We know that we are not lacking in good plans. But what we lack is the political will and the means to implement these agreed plans.

As much as we are concerned about implementation failures, we are also concerned at the paralyzing differences in the areas of institutional framework and of sustainable development.

The failure of the Commission on Sustainable Development to deliver a successful outcome last May clearly demonstrates this. The lack of progress and the unwillingness to honor commitments under the United Nations Framework Convention on Climate Change (UNFCCC) negotiations is another example.

We must ensure that the principle of common but differentiated responsibility coupled with historical responsibility is enshrined in all our endeavors to reach a successful conclusion on climate change negotiations and sustainable development.

In moving towards the Rio + 20 Summit, there are new thoughts on strengthening the institutional framework for environment.

If the current institutional frameworks are unable to meet the daunting environmental challenges, we may have to look at new mechanisms that are inclusive and participatory, with equitable decision making responsibilities.

Nuclear disarmament occupies a central role in the work of the United Nations. This is reflected by the fact that the very first resolution adopted by the General Assembly spoke, among others, of `the elimination from national armaments of atomic weapons and of all major weapons adaptable to mass destruction’.

Yet sixty-five years on, it remains a distant dream. All States need to do their part in order to achieve more substantive progress in this area.

Malaysia is committed to working with other member states to realize the goal of a nuclear-weapon free world. We will continue to advocate for the total elimination of nuclear weapons through a Nuclear Weapons Convention.

To progress further on this issue, we require consensus on commencing the multilateral negotiations process. This in turn, requires good faith on the part of the states possessing nuclear weapons. I call on these states to demonstrate this good faith.

It is apparent that the current international financial architecture is unable to cope with recent developments in the world financial markets.

The World Bank has warned that we are about to enter a ‘dangerous zone’. We need a new financial architecture that will be transparent, equitable, representational and participatory.

We need a new financial architecture that reduces volatility. Lessons can be learnt from the developing economies that embarked on economic reform and strengthened their financial institutions following the Asian financial crisis. Let us put pride aside and learn from each other.

As part of this transformation program, Malaysia has taken a giant leap in reforming its internal security and emergency laws. We have announced the entire repeal of the Internal Security Act. It will be replaced by legislation to prevent subversive action, terrorism and organized violence.

Malaysia is transforming and reforming to be better able to adapt to a changing global landscape. We believe that the UN must also do the same. We would like to see a comprehensive reform of the UN so that it will be able to face current realities and address present challenges.

Most particularly, the Security Council should also be reformed in a comprehensive manner, in order to make it more legitimate, representative, democratic and transparent. For the Council to mediate better, it must be effective, transparent and accountable to the larger membership of the UN. It must no longer be beholden to the veto holders.

In this respect, I come back to your theme, Mr. President. We need to adopt mediation in the search for peace. To this, I would add that we also adopt the principles of transformation and moderation.

A combination of mediation, transformation and moderation constitutes a winning formula to realize lasting world peace. Let us take up this challenge, with all the fortitude that it requires, and together put it into effect, for a united and a better world.