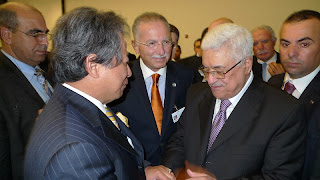 The Government of Malaysia welcomes and strongly supports the announcement by President Mahmoud Abbas of the Palestinian Authority for Palestine’s full membership in the United Nations (UN) on 23 September 2011.

Despite arguments provided by Israel and other countries that peace can only be achieved through negotiations and not by UN resolutions, Malaysia feels that this is the most decisive and realistic solution to finding lasting peace in the Middle East.

Malaysia totally rejects the arguments forwarded by Israel as to why the peace process has stalled especially with regard to the issue of illegal settlements in the West Bank. In Malaysia’s view, the illegal settlements are the core of the problem and they have to be removed.

The Government of Malaysia is of the view that the membership in the UN would not jeopardise the peace process. Therefore, the argument against the membership of Palestine in the UN is weak, unfounded and absurd.

It is time for those who opposed the membership of Palestine into the UN to listen to the voice of the majority which was obvious by the standing ovation that President Mahmoud Abbas received.

The offer by Israel to have immediate talks and the efforts by the Quartet to reschedule negotiations within one month appear to be desperate efforts to dissuade Palestine from seeking membership. Malaysia will assist Palestine in securing the required number of votes it needs in the UN Security Council and in the General Assembly.