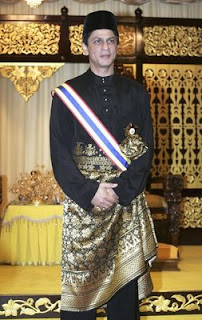 I HAD a good cackle the other day - over a caption that appeared in an article of a mainstream newspaper. It was for photographs of four Malaysian singers who had appeared as the opening acts for George Benson when he performed in Kuala Lumpur.

The caption named them as ‘Datuk Sheila Majid, Datuk Siti Nurhaliza, Datuk David Arumugam and Datuk Khatijah Ibrahim’. Another one whose picture was not included but mentioned in the article is ‘Datuk Yusni Hamid’.

Five datuks performing as a prelude to Benson's entrance. Wow! He might have been bowled over if he had known. But then again, it might not have mattered a mite to a citizen of the American republic that upholds egalitarianism.

To him, it might have seemed that datuks in Malaysia are a dime a dozen. And that only Malaysians seem to take such titles seriously. If Cliff Richard, Elton John, Paul McCartney and Mick Jagger performed on the same stage and their photographs appeared in a British newspaper the next day, the caption would not read: "Sir Cliff, Sir Elton, Sir Paul and Sir Mick."

You can bet they would be simply referred to as Richard, John, McCartney and Jagger. Or just by their first names.

Hey! If you're an artist, you don't need to be referred to as ‘Sir’, right?

It's your art that defines you, no? And those fans out there watching the concert - would they care a hoot if you're a Sir or Datuk? Does having the title make your voice sound better? Hmmm, maybe to Malaysians, it does.

A couple of months ago, I had to cackle too when I read that Malacca had created a new datukship that is lower in class to the existing one.

Called Darjah Pangkuan Seri Melaka (DPSM), it is given to people in government positions that are lower than those of the people receiving the Darjah Mulia Seri Melaka (DMSM). So if your boss is a director-general, he'll get the DMSM but you are entitled only to the lesser DPSM. Cackle out loud!

Other states, it seems, also have such a classification for the ‘Datukships’ they give out. They call these 'Class I' and 'Class II'. Imagine that, even datuks fall into Class I or Class II. Cackle out louder!

But not to worry. As the Malacca Chief Minister quipped, they are still called Datuk anyway.

Hey, but next time someone tries to be pompous and says, "Do you know who I am? I'm a Datuk’, you can ask them, ‘Class I or Class II?’

Still, it must be grand to be a ‘Datuk’ since so many people want to be one.

Some would even pay good money to get the title. In a recent report, the purchasing fee for one case was quoted at RM300,000. That's quite a sum to pay. Or maybe not if you can afford it. I wonder if you could write it off as business expenses.

What would happen if in the near future, there are so many datuks that the title becomes devalued? If we can see it happening on a concert stage, why not in a wider context? Then datuks would come to be taken for granted.

Not so much prestige, status and recognition as before. Not so special any more the feeling of being a datuk. Everyone around the wedding dinner table is one. Imagine the dinner conversation:

"Datuk, please have the last piece."

"Thank you, Datuk, you go ahead. I've had enough."

"So have I, Datuk. Perhaps the datuk beside you would like to have it?"

"No, Datuk, I'm superstitious, I don't want to end up an old maid."

"Oh, of course, Datuk, I'm sorry. I keep thinking of datuks as men."

"I beg your pardon, Datuk! Can't you tell from my looks that I'm a woman?"

Suddenly, there's a commotion at the next table. The real identity of one of the guests has been exposed - he is not a real datuk! Horror of horrors!

What's worse, he has been masquerading as one for years - and fooling his business associates, some of whom are now seated at that table!

"You are worse than scum, Datuk!" yells one of the business associates furiously.

"He's not a real datuk, don't call him that!" yells another.

"Let's throw him out for deceiving us all these years!" yells yet another business associate.

A well-built young man in a suit and bow tie saunters by. One of the business associates calls to him, "Hey, waiter."

The young man glares back and replies, "Excuse me, I'm not a waiter. I'm a datuk!"

"Really?" said the business associate, surprised. "You're so young, you don't even look 30."

"Why are they giving out datukships to people so young?"

"Hey, at least I got mine for serving the country. How did you get yours?"

"Are you insulting me, you young ciku?"

Before you know it, the whole wedding ends in pandemonium! The poor couple who are getting married will remember it as the Dinner of Duelling Datuks.

How wonderful it is that we have a class of people who are higher than us commoners. Without them, life would be so much duller, and certainly less funny. Even with a ‘Datuk’ to his name, David Arumugam sounds much cooler.

And now when he sings 'Dapatkah?', it sounds so much more meaningful. Not bad for a kucing lorong eh?