JALAN LINGKUDAU, FROM BAD TO WORSE 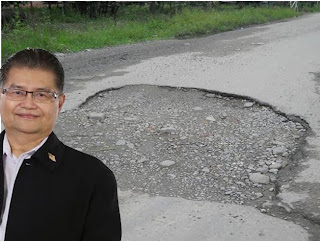 THE BADLY damaged pot-holes and deteriorating road surface, along the stretch at Jalan Lingkudau, Taman Lingkudau within a close vicinity of Pekan Keningau, Sabah being grossly neglected for months even though the public had made previous complaints in the local papers and to the relevant local authority but no actions had been taken to maintain and repair the bad road surface that is deteriorating from bad to worse.

The residents of Taman Lingkudau and nearby villages had been using this stretch of badly damaged road surface for many months since the last report to JKR was brought up by DAP Sabah representative in the Interior District.

Dr Benjamin Yapp, DAP Sabah Parliamentary Liaison Chief for Keningau and Tenom inspected the badly damaged road along Jalan Lingkudau after residents made numerous complaints to DAP Sabah to voice out the people’s grievances and problems relating to the bad road conditions affecting the local communities in Keningau since the local community leaders seemed to over-look or couldn’t be bothered to take any actions within their areas of control.

Dr Benjamin Yapp who is also a Diplomat member of the World Affairs Council pointed out that the local authority had grossly neglected in their duties to maintain and improve the road infrastructure facilities for the tax payers even within the town areas of Keningau township, Sabah, let alone to up-grade the rural roads in the interior.

The pot-holes and cracks needed to be repaired immediately and should not wait until the people suffered unduly with regard to heavy cost of car maintenance and wears and tears of car tires due to pressures and cuts by sharp edges and damaged pot-holes.

The PWD and its appointed contractors should have re-surfaced the stretch of badly damaged road that required less time and efforts with the available machinery and resources within their disposal.

The tax-payers deserved an explanation from the Keningau Rural District council for neglecting the public in providing better road infrastructures and public amenities to the local residents of Keningau District within their jurisdiction. Why should it be totally un-productive and nothing concrete had been done to improve the town road conditions within the town District Council areas?

DAP Sabah urged the local authorities to be pro-active and be productive in executing their public duties towards the general public’s and local tax-payers who have been paying heavily for road tax, motor insurance policies, driving license, high vehicle maintenance cost and spare parts with the increasing prices of fuel but the public amenities and infrastructures within their local District jurisdiction are not up to the standard and the public delivery system should be improved without any compromise whatsoever.