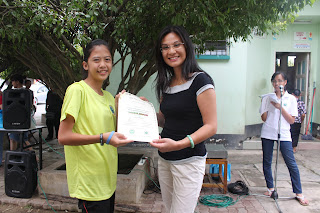 HEAD of the Environmental Action Centre’s (EAC) Toilet Cleanliness Campaign 2011 and member of the EAC Management Group and Steering Committee, Nilakrisna James, said that NGOs in the Penampang district have some of the State’s leading civil and environmental activists.

The campaign took place Wednesday in the public toilet adjacent to the tamu ground in Donggongon town with 30 students specially selected from SMK St. Michael, SMK Bahang and SMK Datuk Peter Mojuntin to participate in the toilet cleanliness awareness seminar and the cleaning demo project.

“The students are enthusiastic, very committed and have a heightened sense of awareness for their environment and the work of civil society activism. Their older counterparts are also active in several NGOs like the Junior Chamber International and the EAC division in Penampang.

“I would say that leadership and activism run in their blood and generally their towns are developing at a rate that would put them ahead of other districts in the West Coast. We are impressed with NGOs here who have excelled in the no-plastic campaign, the river cleanliness program and several environmental projects which they have initiated and followed through for several years.

“The younger generation in Penampang are now encouraged to follow suit in schools and teachers and parents must be credited for their support in these endeavours,” said Nilakrisna in her press statement. 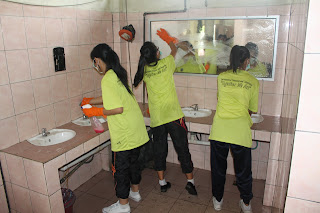 Nilakrisna also said that although Donggongon is not always clean or perfectly landscaped with nice architecture and infrastructure, developers are looking at the area for housing and commercial projects and that Penampang is well set to be a key growth area after Kota Kinabalu.

“The proximity of Penampang to the capital city and the international airport is one of the major reasons we must focus on beautifying the Donggongon area with impressive architecture and landscaping.

“New housing and commercial areas must take into account public toilets in open spaces so that we can encourage a heavier traffic of tourists to this district. The Penampang District Council has informed me that the present public toilet will eventually be replaced with a 5-star toilet facility in recognition of Donggongon as a future tourist stopover gateway to the interior areas of Sabah,” Nilakrisna said.

Nilakrisna added that the EAC is almost at the conclusion of their campaign for this year and have covered every district as planned. Last week, the EAC team conducted their toilet cleanliness campaign at SK St. Paul in Beaufort together with the 3R program highlighting the slogan ‘Reduce, Re-use and Recycle’ followed by the composting and toilet cleaning demo.

“There is still a lot to be done and the campaign will continue under the EAC banner for several years until such time we see all public toilets displaying a 5-star status. Even if I don’t lead this program in years to come, the government has already implemented a public feedback mechanism that will allow the EAC to continue to monitor the situation and create awareness at the youth and grass root levels.

“We must be positive that change must first occur in our mind-set before we can physically change our situation. In that respect, Penampang will continue to lead because the residents of this district have begun to priorities education and activism of the young as a forefront of change in Sabah.”

Meanwhile, 14 year old Allyssa Xylia Sylvester Huil of SMK Bahang was recognised and honoured as the most active and enthusiastic participant of the campaign in Penampang.

“This is the first time I have given due recognition to a child participant because her enthusiasm and zeal throughout this event was exemplary and infectious and she has the ability to rally her peers to positive action. We hope that she will one day harness her leadership potential and carry out environmental activism and bring pride to her school”, said Nilakrisna.