‘RUMAH BESAR’ NOT FOR ANTI-GOVERNMENT 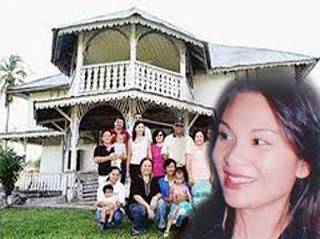 UPKO member and UBF Co-Founder, Nilakrisna James, dismissed the allegations made in a local daily by one of her uncles that her grandfather’s house, Rumah Besar, in Bingkor was used on September 16th for anti-governmental activities.

“I find it amusing that some people never read the newspapers and remain ignorant of my noble intentions for September 16th. As one of 17 owners of the house I have every right to celebrate a party with invited family and friends at my own cost.

“They are invited not for their political affiliation but because I enjoy their company. It was an open invitation made in the newspaper and the whole State was made aware of this in several news releases.

“May I remind people that the UBF is a non-partisan civil rights movement and not a political party and that I have extremely good friends and supporters in nearly every political party in this country whom I greatly respect, including the opposition?

“As a leader with an international outlook I believe it is time for us to leave primitive behaviours and attitudes and embrace the reality that oppositional leaders are just as capable as Barisan Nasional leaders and they have every right to be accorded the same level of respect and hospitality when invited to people’s homes and parties.

“If George Bush is capable of leading the country shaking the hands of Bill Clinton and Great Britain could embrace the reality of a coalition government, the leaders of this country should also emulate such noble behaviours and I believe that in the next election it is absolutely possible for Musa Aman to shake Yong Teck Lee’s hands and for Najib to shake the hands of Anwar Ibrahim,” said Nilakrisna James in her press statement .

She added, “I have made a very clear stand in UBF and UPKO that I stand on the side of the Barisan Nasional. My friendship with the leaders of SAPP and other oppositional parties will not stop just because I intend to one day lead this State as a Barisan Nasional leader.

“If eating, drinking, speaking our opinions, singing karaoke and observing how people celebrate the Batu Sumpah is considered anti-government then the people who make these allegations should just grow up.

“Today I make a very clear stand that I have every intention to represent the people of Sabah on the Barisan Nasional front given that opportunity by the next election and that I will not, under any circumstances whatsoever, compromise or hide the friendships I enjoy with members of the oppositional parties.

“If there is anything wrong with that then I believe it is for the leader of the Barisan Nasional, the Prime Minister, to make a party policy on the issue which should be publicly stated. If I don’t agree with a Barisan Nasional issue I will make it very clear in my press statement.

“I would listen to the Prime Minister because he has my respect, but I will not and shall not listen to a person I have absolutely no respect for and would advise the people of this nation to exercise the same caution before passing judgments on others.”