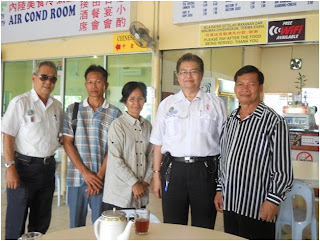 DAP Sabah interior is penetrating into the heart of the indigenous remote people of the interior in its efforts to carry out its mission towards improving the socio-economic development of the rural people, particularly the Murut and Dusun who have been neglected for many decades since Sabah achieved its independence 48 years ago.

Dr Benjamin Yapp, DAP Sabah Parliamentary Liaison Chief for Keningau and Tenom and his Deputy chief, Mr Phillip Voon have volunteered to carry out their mission for mankind and provide voluntary services to the rural communities without expecting any rewards.

Now as he is assigned a duty to help DAP Sabah to establish its rural base in the upper interior of Sabah, Malaysia, he had accepted the challenges to contribute his unfailing efforts to help the rural communities regardless of their race, creed, culture and affiliation as he believed that the people of the rural areas and interior of Sabah deserved to improve in their standard of living and alleviate from poverty that had been their major problems facing the rural people.

Dr Benjamin Yapp who is also a Diplomat member of the World Affairs Council on Social, economic and political development, had carried out a number of research on the rural socio-economic development and poverty problems of the rural people during his nearly two years of stay in the interior District of Keningau, Sabah.

He had compiled papers on the rural development of the interior of Sabah, focusing on the rural communities and their lifestyles as well as the basic rural infrastructures and amenities that had been an issue needed urgent attention from the Government.

DAP Sabah interior led by Dr Benjamin Yapp had succeeded in penetrating into the Murut areas of Melalap, Kemabong and now his DAP Sabah interior Mobile service team is gradually spreading its mission into the remote heart of the Murut strong-hold in the lower interior of Pensiangan covering Sook and Nebawan with supports from local Murut leaders who have opted to have an alternative Pakatan Rakyat Government.

DAP Sabah is now ready to recruit thousands of Murut community in the Lower Interior within a short span of time under the leadership of Dr Benjamin Yapp, a local Sino-Native of Sabah who is also DAP Sabah Rural Development Bureau Chairman responsible in the rural development portfolio.

DAP is offering opportunities for deserving Sabahans to be local leaders and members regardless of their race, creed, and culture. Pakatan Rakyat Sabah is granting full autonomy for Sabahans to rule Sabah under the PR Government.

We want sincere, honest and capable local leaders to take charge of the affairs of the people and the State without compromise. Pakatan Rakyat Sabah has just passed a resolution in its first Pakatan Rakyat Sabah Convention held in Kota Kinabalu, Sabah recently in order to achieve the Twenty (20) points Memorandum to protect the interest of the people of Sabah who have always wanted for their future generations.