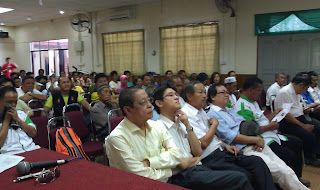 LEADER….. PR leaders at the Meet The People session in KB.

A DIALOGUE held by the Sabah DAP at the Kota Belud Rasa Sayang Multi-purpose hall was successful held on the 24th of September. This Meet the People session was carried out to replace the originally fixed Tambatuan Dam debate as initiated by the Kota Belud MP Datuk Abdul Rahman Dahlan to challenge the DAP National Advisor Lim Kit Siang to a debate on the topic entitled ‘Is Tambatuan Dam needed?’

The session attracted some 100 participations from Kota Belud who expressed their views, dismay, and anger over the various issues and problems arising in the Kota Belud district.

The hottest issue is definitely the Tambatuan Dam, where the people spoke against the idea of constructing the dam which will have plenty of adverse effect which the people there can visualize.

They main concern is still focusing on the impact to the environment, lost of traditional home ground, lost of income and livelihood, problems from resettlement, the government’s empty promises, change on way of life and to conclude they just don’t want to be moved.

On the part of the Kota Belud Jelapang Padi planting area, the people complained that there are abandon supply of water, and in fact most of the padi fields are submerged and flooded. There is no way there they can plant padi and such deep water. There is no proper irrigation system to drain off the excessive water from the flooded areas.

The Military live ammunition fire range under Camp Paradise is also a topic “under fired” due to its close proximity to the surrounding kampongs. There had been at least five incidents where kampong folks picked up life cannon shell to sell as scrap iron and were blown into pieces.

The safety of the people here is at stake. Some people said that the Camp Paradise must be moved and the land to be returned to the kampong folks. Furthermore they dislike that the Ministry of Defense is continuing to take the land from this large piece of grazing reserve land and turn into future military training ground.

The Sewerage treatment plant was brought up in the dialogue session and the people from the three kampongs expressed their anger of such an expensive treatment is simply plugged into their kampongs which will be creating a lots of health hazards and inconvenient to the people here. They said they will continue to object the work to be carried out to completion here until the government moved it.

The Rampayan Laut NCR land matter was briefly mentioned, and the matter shall be studied further at a later stage, and now it is just put under record.