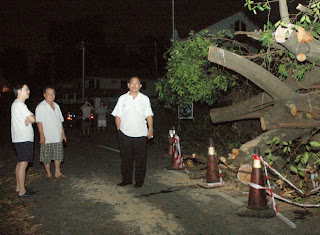 INSPECTION…..Chong (right) is accompanied by a few residents during the site inspection.

BE MORE committed and proactive in dealing with natural disaster, the State government has been told.

Sabah Progressive Party (SAPP) Information Chief Chong Pit Fah said the State government should immediately activate the State Natural Disaster Committee in the various districts, the moment it learnt of an imminent typhoon or an earthquake in the region, which might lead to a natural disaster.

“Such a preparation is not impossible unless the State Meteorological Department is not functioning properly or, there was no communication at all between the Department and the relevant State agencies, in particular the State Natural Disaster Committee, which is spearheaded by the State Secretary,” he said.

He stressed that an early preparation would ensure a quicker and efficient crisis response and management that is crucial towards saving the peoples’ lives and properties, or at least minimizing the people’s suffering.

He stressed this after inspecting the Taman Tai Tet in Dah Yeh Villa, Likas here on Wednesday night, to follow up on complaints from some disgruntled residents there who had endured close to 3-days (approximately 69hrs and 45 mins) of power outage, from 4am on Monday to 12.45am on Thursday.

This was after the Sabah Electricity Sdn Bhd (SESB) power cables were damaged by fallen trees uprooted by the strong tail winds from typhoon Nesat which hit Sabah on Monday.

A few disgruntled residents had informed Chong that about 100 households and a row of shops there were affected.

One of the complainants, Wesley Yeo lamented that the long hours of power outage had caused them, especially the elderly residents and the young babies, great inconvenience and suffering.

“Everything was not functioning. We can’t even charge our mobile phones and the worst part was we can’t sleep properly at night, not just because it was stuffy as we can’t open the windows due to strong winds and heavy rain, but also due to security reason,” he lamented. 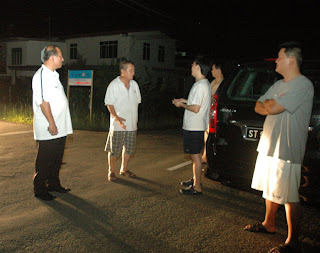 LISTEN…..Chong (left) listens to the complaints of the affected residents during the site inspection.

He also said for the past two days, he had been calling the SESB hotline not less than a dozen times to inquire about the status of the problem and each time was only told that its technicians were doing their best attending to it.

He added that this was also the first time they experienced such a long hours of power outage in the last three decades.

Another resident who only wished to be known as Andrew meanwhile complained that all the food which he had just purchased and stored in the refrigerator had gone bad.

Chong who is also SAPP Kepayan Constituency Liaison Committee (CLC) thus described the long delay in restoring power supply to the said residential area, as a vivid testimony of gross incompetence of the entire State machinery, in particular the State Natural Disaster Committee.

“This (the extended power outage) happened right in the middle of the city and it still takes three days for the SESB to restore the power supply. Just imagine how long would it take if the same problem were to happen in the rural area?

“This only goes to show that all the talks and constant shouting of such slogans like ‘People First. Performance Now’, the KPI (Key Performance Index) under the ‘Government Transformation Program’ are just a rhetoric, if not a sick joke,” he said.

He quipped that the SESB probably could have resolved the problem within hours, if a minister or some senior Barisan Nasional (BN) leaders too are living in the said residential area. 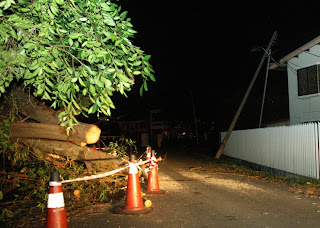 AFFECTED…..A view of the affected site with the aid of vehicle headlights.

Chong also questioned where were the Barisan Nasional (BN) leaders and elected representatives concerned, when the residents were in dire need of their attention and help.

“Recently, we noticed that they (BN leaders) have been zealously fighting over the seats including those which are currently held by SAPP. At least our leaders like Datuk Liew Teck Chan (Likas State assemblyman), despite of being in the opposition, was closely liaising with the SESB and monitoring the situation,” he said.

He also noted that each time when Liew called up the SESB to check on the status of the power outage, he too was given the ‘standard reply’ that its technicians were still working on the problem.

He thus urged the people to vote the BN out in the coming general election, in order to have a better future.