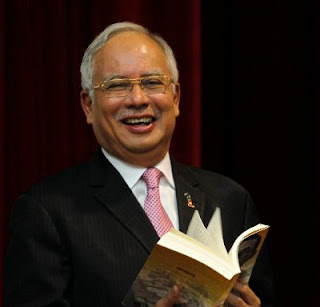 DATUK Seri Najib Razak expressed today the need to eventually do away with Bumiputera quotas but said the government must continue to support the community’s best talent to ensure a more competitive business environment.

The prime minister pointed out that the New Economic Model (NEM) promotes affirmative action based more on meritocracy, saying “we must promote the right Bumiputera”.

“What we have done in the past is we have not promoted the right kind of people. We want to do away from (with) quotas but we must support them (Bumiputera entrepreneurs) in a way that would allow them to grow,” he told the Khazanah Megatrends Forum 2011 here this evening.

“If we give them quotas, what will happen is that they will rest on their laurels and eventually, they will not gain expertise,” he added.

Najib said the 30 per cent Bumiputera equity target “does not mean anything”, particularly if entrepreneurs decide to sell off their shares when prices soar, leaving little in the hands of the Bumiputeras.

He said the government was now moving on a different footing by seeking “good, tested and dedicated” Bumiputeras and supporting them in a manner that could help them become more competitive.

As an example, Najib mentioned Teraju’s recently launched programme to train 1,100 top small, micro and medium-sized Bumiputera companies under a special entrepreneurship programme as one of the government’s new initiatives.

“That is the new approach — to create a new class of Bumiputeras who are more resilient and can succeed in the long run,” he said.

Critics have accused Najib of diluting his NEM by creating agencies like Teraju and failing to focus on needs and merit-based affirmative action policies but government officials said the move was necessary as Bumiputera equity in the economy remained low despite the billions doled out since the New Economic Policy (NEP) began in 1971.

In his speech earlier, Najib also expressed a need for the government to remove “rigidities within the system” in order to create a more resilient economy.

“We know that people do not start in the same place... we know that everyone is not equally endowed... we know too that there will be winners and losers when things change - and of course we worry about those who deserve assistance more than those who could easily get by with less,” he said.

“Equally, we want to see winners who find their lives and the lives of their families transformed rather than simply enriching those who already have too much,” he added.