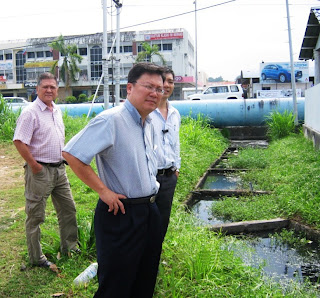 He was commenting this matter when received alarming calls from angry residents of Taman Delima & Kg Nosoob, Kapayan, Penampang over the clogged drains and stagnation of pooled water along all the drains in the areas. These clogged areas are haven for the aedes mosquito to breed lavishly. The sites were very disgusting and unhygienic according to the angry residents.

Dr Roland Chia urged for vigilant supervision to be conducted statewide or else there will be a potential dengue outbreak in Sabah and not only in Penampang.

Despite the assurance of the recent report by the Ministry of Health with regards to the number of dengue cases and related deaths between January and Aug 13 saw a drastic drop compared to the corresponding period last year is most welcoming, ie 12,735 cases were reported this year, down by 58 per cent from the 30,455 last year.

21 deaths were also reported this year, 78 per cent lower than the 95 recorded last year BUT the fact 10 out of the 14 states recorded a rise in the number of cases, with 12 in Selangor, 10 in Kedah, eight in Terengganu, two each in Melaka and Perak and one each in Perlis, Sabah, Pahang, Penang and the federal territories of Kuala Lumpur and Putrajaya. Sabah is not spared either to see an increase of death.

Dengue fever is an infectious tropical disease caused by the dengue virus. Symptoms include fever, headache, muscle and joint pains, and a characteristic skin rash that is similar to measles.

In a small proportion of cases the disease develops into the life-threatening dengue hemorrhagic fever, resulting in bleeding, low levels of blood platelets and blood plasma leakage, or into dengue shock syndrome, where dangerously low blood pressure occurs.

Dengue is transmitted by several species of mosquito within the genus Aedes, principally A. aegypti.