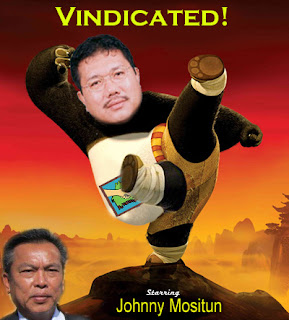 WHEN the Prime Minister announced the government will repeal the Internal Security Act and other important reforms Datuk Johnny Information Chief, PBS celebrated, saying it was a clear proof that the Barisan Nasional (BN) government is responsive to the people's feelings.

He claimed that, "These important reforms vindicate the decision by our President, Tan Sri Joseph Pairin Kitingan, to rejoin the BN 10 years ago. Today Pairin's faith in the BN to do the right things for the people and nation has been proven correct."

But he has spoken too soon. Now, the proposed repeal has boiled up a storm, with Tun Mahathir expressing worry that irresponsible people may abuse the freedom, and a national security expert in Singapore saying it is a dangerous thing to do.

But while we are glad that the BN is opening doors to more freedom, we have to realize that there are still many repressive laws out there that are suppressing our freedom and giving Malaysia a bad reputation among in the regional and international communities.

Such laws include Official Secrets Act (OSA), the Universities and University Colleges Act (UUCA), the Multimedia and Communications Act, the Public Order (Preservation) Ordinance. Instead of celebrating too soon why doesn’t Mositun make a call to urge the PM to repeal all these laws as well?

Many opposition leaders and NGOs have expressed strong suspicion that the PM’s announcement was just a ‘sandiwara’, or an act to put old wine into new bottles and to make it even worse by introducing two new laws.

There is no guarantee that the new laws will not be as draconian as the ISA. And the proposed repeal will only be done next year which raise the question: Will that be after the general election?

If so, Najib is only performing a clever vote-fishing trick. And may I ask: If the new laws are still having ISA-like provisions as demanded by Ibrahim Ali, will Mositun demand that PBS leaves the BN, because the PBS would then be ‘unvidicated’? Mositun’s habit of jumping the gun and apple-polishing for the BN had made him lose his political character and credibility, and may very well be a liability to his own party.

The whole issue about PBS re-joining the BN in 1998 centres on the question of principle and the spirit of the struggle of the Kadazandusuns. If the PBS undertakes an independent survey today I sincerely believe it will confirm the fact that most Kadazandusuns don’t think too highly of the Huguan Siou anymore, and that PBS’ struggle is more for personal interests than for the people’s long term vision. The fact still stands that by joining the BN, PBS had become subservient to Umno, which had a strong effect on the morale of the Kadazandusuns.

The unhappiness about PBS is not limited to members and supporters only but among its leaders. There is now the possibility of revolts by leaders in the PBS due to unhappiness over choice of candidates, and Pairin’s insistence on contesting in both Keningau and Tambunan again after three decades.

Their impatience over the long-standing issue about the illegal immigrants from the Philippines and Indonesia is just about to boil over because they believe the party’s top leaders have been kowtowing to Umno too much too long. To them the so-called deadline PBS had given the BN to solve the illegals problem by 2012 is not enough, and seem just a ruse to cool down their impatience.

The other prickly issue facing the PBS is the unfair power-sharing formula in the state BN in which Umno takes more than half and the rest split between the rest of the components. Because of this, an online portal reports that PBS divisional chairman for Sook, Bernard Maraat, is a potential rebel to stand as an independent in the coming election.

In an effort to convince the people that PBS is really fighting for their interests in the BN, the PBS Secretary General, Datuk Henrynus Amin had also made a statement this week that the PM’s announcement to repeal the ISA, “showed BN was responding to the grouses of the people and therefore a victory for democracy, human rights and civil liberties.”

But by saying that he was also admitting that all these years when the ISA used, it was a defeat for democracy, human rights and civil liberties! So why did the PBS support the BN all those years, knowing it was wrong and humanly immoral?

Henrynus also proposed on how BN should adopt ‘winnable policies and winnable political strategies’ for the next general election. He should be reminded that for the BN to win the next election, it doesn’t have to hire any world-class think tank to come up with complicated strategic plans or use billions of ringgit to corrupt the voters. All it has to do is to list all the grouses raised by the people and resolve these within the next few months!

Henrynus and Mositun need to ask BN if the federal government and UMNO will ever agree to reinstate the original promised rights and autonomy for Sabah and Sarawak, to establish the RCI to look into the Project IC, to raise oil royalty to 20 percent or more, to reform many government institutions (such as the police, the judiciary, the MACC, the election commission, the Malay-dominated education system), to wipe out corruption, dirty cronyism and political patronage; to stop the many abuses of power, to stop the suppression of the Christians (by allowing the Bible to be printed in any language in Malaysia); to shut up the mouths of mad Malay nationalists like Ibrahim Ali and to end the seditious speeches about Malay supremacy, to implement true meritocracy, transparency, accountability and openness which are the epitomes of good governance.

And there is also the problem of the depressed and down-sliding economy, the high inflation rate and the worrying depletion of our purchasing powers, the brain drain, the cabotage policy, the Malay-centric public service, the border security problem, the high rate of violent crimes, the yo-yo experiments with the education system, the highly contaminated electoral rolls, the non-transparent and very suspicious election process, the lack of independence of the judiciary, and so on and so on.

If the BN will listen to the PBS and do all these, ONLY then PBS will truly be vindicated. When this happens, I am certain not just the PBS leaders and members, but the opposition leaders and supporters as well, will join in the celebration with dancing and fireworks! And the opposition will have no more issues to talk about!