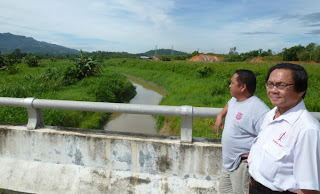 THE Telipok River is urgently needed widening and deepening in some parts which is being silted up and forming some serious bottle necks along the river flowing from Telipok to Kg Norokot some 4 kilometers from the town.

Edward Ewol Mujie was brought to inspect the river in Telipok by the resident here who worried that the bottle neck and narrowing of the river will result in serious flood in the Telipok town again. He said these had caused serious damages in the area last time and the people here do not wish to see that the Telipok town will be once more submerged.

Edward was told that there was a contract awarded to clear the river and including the widening work on the river banks, but the work seems to seize and no further has been taken after that, the people here wonders what had happened to the contract work or the work had finished and concluded. Just by looking at what there is on site, there seem no work done at all, as the kampong people here said.

The river here is indeed needed widening and it looks just like a small stream with very narrow river bed. How can the millions of gallons of water from upstream to flow fast and get discharged quickly?

The funny and illogical part is that this river is having a very wide downstream section after the concrete barricade, and the section up stream is small and narrow. This requires the engineer from DID to explain to us.

Edward urges the DID (JPS) top check through this complaint from the people here and he hope action can be taken to widen the river to allow a faster flow of the river to swiftly discharge the water from upstream Telipok.