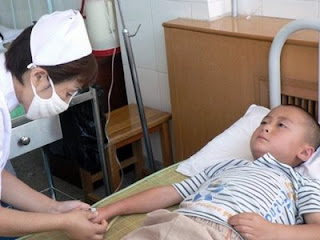 A total of 139 people from three villages in Luqiao District, Taizhou, were tested as having elevated lead blood levels, including 35 children, the Zhejiang Health Department said in a statement.

Three of the poisoned, all adults, had over 600 micrograms of lead per liter of blood, three times above the limit considered safe for humans, the statement said.

However, none of the 501 villagers tested were hospitalized as no symptoms of severe poisoning were found.

"An inspection of the battery plant showed that lead readings in gas and water discharged from the plant exceeded the legal limit, which also resulted in excessive lead in the earth nearby," said Jiang Xincai, director of the Luqiao branch of Taizhou Environment Protection Bureau.

Groundwater, fruits and vegetables in the area were probably polluted by lead, said the bureau, suggesting villagers refrain from eating them.

The battery plant, located just meters away from the Shangtao Village, went into operation in 2005.

"The pollution could have been around years as lead accumulates in the body over time," said Zhu Zhiwei, a doctor with the children's hospital affiliated to Zhejiang University, who is providing medical treatment to the poisoned children.

Production at the battery plant has halted while investigations continue. The plant will not resume operations until the pollution problem is solved.

Exposure to high levels of lead can damage the digestive, nervous, and reproductive systems of people.

Battery plants in China are often blamed for lead poisoning due to lax supervision.

In January, more than 200 children living near a battery plant in eastern Anhui Province showed elevated levels of lead in their blood, with 28 of them hospitalized.