STOP BLAMING OTHERS FOR YOUR OWN MISTAKE 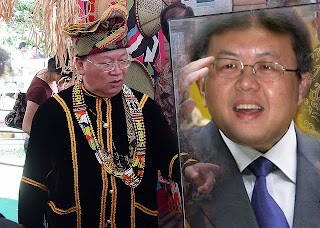 PARTI Bersatu Sabah (PBS) President Tan Sri Joseph Pairin Kitingan must not attempt to cover-up his own miscalculation of pulling PBS out of the Barisan Nasional (BN) in 1990, by blaming the others now, said former party comrade, Datuk Tham Nyip Shen.

Former Prime Minister Tun Dr Mahathir Mohammad had written in his memoir, that it was a mistake for PBS to have pulled out of BN on the eve of the general election.

“I fail to see why Pairin, being a senior leader, up to today still comes up so many excuses to cover-up his mistake of pulling PBS out of BN at that time. I am sure way back in 1985, he already felt very bitter when after winning the election in the same year, PBS was not allowed to form the State government. We were all thankful to Tun Musa Hitam that with his help PBS finally gets to form the State government.

“Today, for any remaining PBS leaders who were with him (Pairin) at that time to conveniently choose to forget the collective decision made then, and to start putting the blame on others is simply wrong and inglorious. I feel so sorry that despite being the President of PBS since 1985, he (Pairin) was still unable to set the official records straight,” said Tham.

He contended this while responding to a recent statement made by PBS Vice President Datuk Radin Malleh, implicating him (Tham) and another two former high-ranking PBS leaders namely Datuk Yong Teck Lee who is currently President of SAPP and Tan Sri Bernard Dompok, currently President of UPKO, of being responsible in forcing Pairin into making that fateful decision to pull out from the ruling Barisan Nasional coalition on the eve of the 1990 general elections.

Radin was commenting on Dr Mahathir's recent comment contained in his book that Pairin lost the opportunity to develop Sabah the moment he decided to pull out from the Barisan Nasional just before the 1990 General Election.

"Although Pairin was already pushed to the wall, he remained loyal to BN until an emergency PBS Supreme Council meeting held on Oct. 15, 1990 where he was forced to agree to pull out from BN by Datuk Yong Teck Lee and Datuk Tham Nyip Shen, supported by Tan Sri Bernard Dompok.

"These three people were very adamant to get out from BN," said Radin, in a statement issued on Tuesday.

Tham said although he is no longer a member of any political party today, he thought that he has a duty and responsibility to come forward to set the records straight especially when his name was implicated in the said comment.

“I feel that having facts misplaced in the PBS official records not only is unfair to me and those who were involved at that time, but also to our future generations,” he stressed.

He maintained that it was a serious misjudgment for PBS to leave BN in 1990, citing that this was what predicted by the former President of Parti Gerakan, Tun Lim Chong Eu.

He recalled that when Pairin was about to make the announcement that night, Tun Lim was desperately trying to contact Pairin to personally advised the latter to rethink the decision. Lim even got his then political secretary, Tan Sri Koh Tsu Koon to contact him (Tham) to tell Pairin what drastic consequence of pull-out would there be.

“And despite the fact that PBS had signed a confederation with Parti Gerakan at that time, the advice was ignored. The announcement was made and the rest is history,” said Tham.

He also put on record that he was not even in the Supreme Council of PBS when the party pulled out of BN.

“I was in Sandakan when it happened. I was never told nor consulted over the decision, nor was I in any meeting that decided it. In fact, I had even in a number of private discussions with other PBS leaders voiced my view against pulling out of BN before the incidence. These leaders are still around,” he recalled.

The former Deputy Chief Minister of Sabah also scorned at Radin’s claim that his Boss (Pairin) had remained loyal to BN till the last moment, although the Federal leadership at that time did not favour the party.

“If that’s indeed the case, why then it took almost 12 years long, long after the three of us had left the party before it (PBS) rejoined BN?” he asked.

PBS rejoined BN in 2002 with the help of Tan Sri Chong Kah Kiat, the former President of Liberal Democratic Party (LDP) who was the Chief Minister of Sabah at that time.

Tham further noted that after leaving PBS before the election in January, 1994; both he and Yong had gone on to form SAPP and joined BN while Dompok formed Parti Demokratik Sabah (PDS), the former self of UPKO, and both also joined BN in the same year.