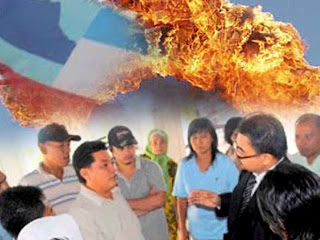 The High Court on Friday also ordered the Abdul Rajak to keep a low profile while on bail, or he will face another charge for contempt of court.

The court however refused to release Abdul Rajak’s brothers, Abdul Pasaran Aliuddin and Jul Asri Aliuddin together with nephew Amiru Pelair and six others. They remain in Tawau prison.

Abdul Rajak is believed to have returned to his home in Lahad Datu with his family who attended the appeal hearing and could not be contacted.

His wife, Ashria Saka however confirmed his release pending the appeal hearing in June 8.

“We will try our best to bail out our families’ members and friends still serving jail term in Tawau prison,” said Ashria.

Abdul Rajak and eleven others were jailed after being found guilty of taking part in an illegal assembly and burning the Sabah flag at several locations in Lahad Datu town on the morning of April 4, 2009.

He and his followers, including his nephew Nizam Asyikin Abd Wahab who was a 14-year-old then, later surrender themselves to the police.

The were arrested and charged in court later that year.

Lahad Datu Magistrate Amir Shah Amir Hassan on Nov 8 last year found the accused guilty under Section 27(5) of the Police Act, 1967 for illegal assembly (except for Nizam), and sentenced them to eight months’ imprisonment and a fine of RM10,000 each or another four months’ jail.

Abdul Rajak, the first accused, was also found guilty under Section 435 of the Penal Code for destroying property worth around RM50 and sentenced to five years jail.