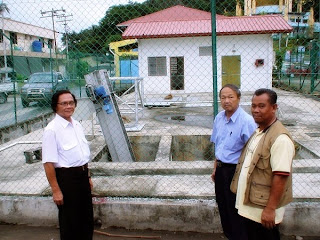 THE Pakatan Rakyat team visited Kota Belud yesterday to attend to the various complaints raised by the people there. The PR team was led by the DAP Kota Kinabalu MP Hiew King Cheu, with Vice Chairman Edward Ewol Mujie, from PAS was the Deputy Commissioner of Sabah Mohd. Aminudin b. Aling with the Pas Publicity Chief Ag. Laiman Bin Hj Tkin.

They were brought to see the new sewerage pump house in the middle of the town which had been completed for quite some times and not yet put into operation. According to the people there, the power is still not connected and the installation of the equipment is not completed. It is observed on site that the power cable on the wall is not connected to the meter box.

The pump house is believed to be serving for pumping the raw sewerage from the town to a distant oxidation pond for treatment purpose. 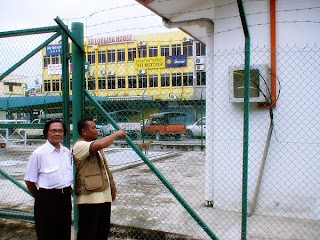 CUT…. The SESB power is not connected to the pump?

The people said it is unreason that the authority has not hurried up with the work and get the pump house completed and operational. They also worry that the pump house will emit foul smell and even overflow once there is a breakdown occurring.

The authority is urged by Pakatan Rakyat to speed up the work and get this installation working. We cannot spend so much money and leave the whole thing abandoned. The people’s money must be well spent.

PAS Mohd. Aminudin asked the KB town council or the JKR to explain and make known to the people in KB on the reason why the pumping station is not completed.