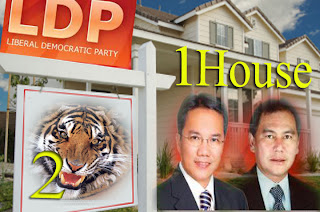 THE Liberal Democratic Party (LDP) said it will reject any attempts by Barisan Nasional (BN) to ‘compensate’ it for the loss of positions in the state cabinet and government. It’s also a sore point with LDP that peninsular-based political parties in the state now hold nine out of the 12 posts in the Sabah cabinet.

This stand comes in the wake of comments from Gerakan that other component parties like MCA should sacrifice some government posts for LDP. The reference is to chairmanships of GLCs, political secretaries and senators, among others.

The oldest component in the Sabah BN, the LDP has been reduced to zero representation in the state cabinet despite winning all its seats during the last general election.

Gerakan, meanwhile, which was not given any seats to contest, has two members in the state cabinet following defections from LDP and the Sabah Progressive Party (SAPP).

Liew was explaining LDP’s position on the BN’s oft-cited power-sharing formula after hinting he was amenable to a compromise. He had called for a reasonable and fair deal for the LDP after the party’s loss of the two posts.

Liew had the unanimous support of LDP leaders and the rank-and-file. The two controversial appointments, he said, upset the equilibrium in the BN and it Musa alone who has to bear the responsibilty for having acted against the interest of the BN.

“We are sure that the other components parties in the BN, except for the PBS and Gerakan, are jittery about the current situation. Musa has set a bad and dangerous precedent,” he said.

While acknowledging that the chief minister had prerogative powers to appoint members to the government, Liew said that such discretionary powers must be exercised judiciously.

Pang’s retention, said Liew, was absurd while PBS getting a second DCM post – at the expense of LDP–was illogical. The LDP sees itself as representing the Chinese community in Sabah BN after the 2008 pullout of SAPP.

Pang, a LDP deputy president, defected to Gerakan recently. Liew said tempers and emotions were running high in the party and any attempt to offer sweeteners to dilute the bitterness is an afterthought and not workable given the circumstances.

There were those who felt that the party should review its position in the coalition, and Liew stopped short of saying that many wanted to quit the BN. “Needless to say, we will continue to serve the people of Sabah in the various capacities we have and act without fear or favour.”

He said members were able to rise above the rhetoric and look at the scenario objectively without letting “our hearts rule our heads”. This was unlike some people who, according to him, were personal.

“Despite the animosities with the leadership, our members did not let that cloud their better judgment,” said Liew. “This is in the interest of the people especially the Chinese community and the state.”

Information Chief Albert Kok, meanwhile, demanded that the youth and sports portfolio retained by Pang be returned to LDP since it was not right for him to take the post along to Gerakan.

Youth chief, Chin Shu Ying, is fuming that the party has lost its posts in the state government and is losing other governments posts.

“The Chief Minister listens to every single word each time we talk to him,” said Chin in acknowledging Musa’s call for talks. “After that (the talk) we end up losing even more posts.”

Chin charged that besides a full cabinet position and a DCM post, the LDP had lost the post of deputy speaker, a senate post and numerous chairmanships and deputy chairmanships in state GLCs and other government bodies. The party, added Chin, had been reduced to an assistant minister’s post in the state cabinet.

In a cynical take, Chin stressed that LDP should not blame Musa but instead “learn from Gerakan on how to master the skill of talking and begging and collecting rubbish from other parties”.

LDP, set up in 1989, won the Sandakan parliamentary seat during the 2008 general election and the state seats of Tanjung Kapor (Kudat), Merotai (Tawau) and Karamunting (Sandakan).

Karamunting state assemblyperson Pang had been partyless since leaving LDP in September last year. This followed LDP deputy president Chin Su Phin’s statement that the party could no longer work with Musa.

Former LDP president Chong Kah Kiat relinquished the DCM post prior to 2008 after a fallout with Musa over the abortive Mazu–Goddess of the Sea–statue project in Kudat.

His post was taken over by then SAPP deputy president Raymond Tan who relinquished it after joining Gerakan instead of following his party into the opposition. Pang was then made DCM as LDP Deputy President.