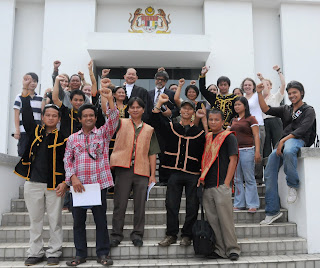 A LEADING land rights activist in Sabah, invoking a Federal Court ruling on Tuesday, has urged that the state government speedily return all native customary rights (NCR) land seized from their lawful owners ‘under one pretext or another’.

He said the ‘return’ could also be in the form of equivalent state land or monetary compensation ‘if the rightful landowners agree’.

“The courts are now clear on the status of NCR land as decided by the Federal Court on Tuesday,” said senior lawyer Kong Hong Ming who works pro bono on NCR cases.

“The state government can also refer to the other landmark judgments on NCR cases in Sabah and Sarawak.”

He was commenting on the Federal Court decision to deny application for leave to a businessman, Ruddy Awah, to appeal against a lower court decision favouring Rambilin Ambit, 54, over the ownership of a 15-acre land in Pitas, northern Sabah.

Chief Justice Zaki Azmi, the Chief Judge of Sabah and Sarawak Richard Malanjum and Federal Court Judge Mohd Raus Sharif unanimously dismissed the application for leave by Awah to contest the judgments of the Court of Appeal and the High Court.

Kong, who also heads the Land Development and Management Committee in the Sabah PKR presidential council, pleaded that “the natives not be dragged to court any longer on a case-by-case basis”.

He said that very few natives can be like Rambilin who fought an unprecedented legal battle all the way from the Pitas Land Office to the Federal Court for over 15 years from 1996 to 2011.

There’s no longer any justification to delay redressing the grievances of those who have lost their NCR land to the state government, state agencies, government-linked companies, private companies and individuals, he added.

“Almost all the lands lost have been for private gain and not public purposes.”

He attributes the loss of NCR land to land grabs and either inaction or the lack of knowledge on NCR issues at the administrative level in the Land and Survey Department.

According to Kong, three principles in the Rambilin case were highlighted “and this should be good enough for the state government”.

First, that NCR, being a pre-existing right before any land legislation, exists until today; second, that Rambilin, being a native of Sabah, is not required to seek the permission of the authorities before entering state land to establish NCR claims; and third, NCR prevails in common law as the state’s interest or rights in land is subject to any native rights over land. 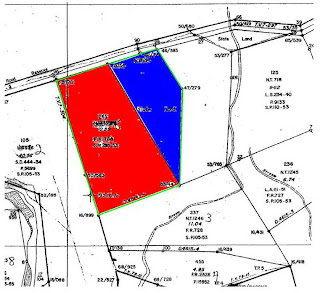 “The Rambilin case renews focus on the predicament of the natives who have been and continue to be deprived of their customary rights in land,” said Kong. “It remains to be seen whether the state government will settle all land cases which can use Rambilin as a binding precedent.”

He said that one critical issue was whether the land administrators at the Land and Survey Department, and others holding public office, “truly understand and are competent enough to determine NCR land held by natives”.

He added that the department should have a proper mechanism to give effect to such rights without causing further deprivation and injustice when it comes to property rights.

If this was done, he said, the natives would not be forced to resort to the courts to seek relief.

He also suggested that the state government carry out a full settlement exercise to determine and return all NCR land to the natives.

He said that such an exercise would be in line with the status of the state government as the custodian of the natives of Sabah.

However, he does not think the lost lands would be returned automatically “unless the natives bring pressure to bear on their legislators”.

He fears that Barisan Nasional (BN) component parties in Sabah may have been rendered irrelevant by the presence Umno in the state government.

Kong suspects that some legislators may also have been in cahoots with the land grabbers to deprive the natives of their NCR claims.

He said this could be observed from the inaction and indifference of these legislators in the face of rampant land grabs which “create deprivation, insecurity and uncertainty among the natives and denies them justice”.

He warned that any state government efforts towards alleviating poverty among the natives will be an exercise in futility if fundamental property rights issues are not resolved.

Justice Ian Chin, in allowing Rambilin’s suit on July 9, 2007, declared that she was entitled to possession of the land in Kampung Gailun Salimpodon, Pitas, and ordered Ruddy or his servants or agents to vacate the land and deliver it to her.

He also ordered Ruddy to pay Rambilin mense profit at the rate of RM500 per month from Dec 1, 1996 until possession of the land is delivered to Rambilin as well as pay her special damages of RM66,500 and statutory interest at 8% per annum from Dec 31, 1996 until the date of judgment.

Chin also ordered Ruddy to pay mense profit of RM10,000 being exemplary and aggravated damages, saying this was justified by the fraudulent scheme, with costs to Rambilin.

Rambilin, according to her affidavit-in-support, claimed that she bought the two pieces of land totalling 15 acres in the village in 1982 from one Sharif Osman Sharif Murah and Sharif Endun Sharif Ading. She and her husband cleared the land and built a house as well as planted coconut trees and fruit trees.

Rambilin did not stay continuously on the land as she had to follow her husband who was a government servant on his postings.

During her absence, Ruddy entered and took possession of the land
Posted by sabahkini.net at 23:22