WHERE IS UMNO’S MORALITY IN THE SEX VIDEO? 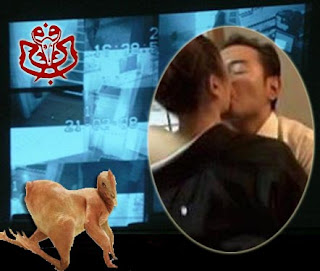 I THOUGHT it was really ironic recently when so many demonstrations were staged urging the government to investigate the sex video allegedly involving Datuk Seri Anwar Ibrahim. One of these demonstrations include one organised by Sabah UMNO, with participation by Filipino immigrants. This made me think of some very pertinent questions about logic in the whole matter.

Why is Datuk Seri Nazri Aziz promoting the screening of this video as if there is no law against pornography in Malaysia? Why are the Datuk T, trio members all form UMNO? Who set up the trap to record the video and who were the actor possibly arranged to perform the pornographic act?

Why is it legal to possess a pornographic CD and to show it to leaders and members of the public, in the parliament building og all places, as long as you are the de facto law minister in Malaysia?

And why is the Minister of Home Affairs are threatening to sue others now that he is accused of Datuk Seri Anwar Ibrahim as the one behind it all? Shouldn’t he be directing the Ministry of Home Affairs (Kementerian Dalam Negeri) to arrest those making a circus of the video CD? That way the truth will be revealed and there will be o more need to sue anyone.

I feel it is really shameful the way UMNO is skirting around the real issue and helping the Datuk T trio in their agenda to shame an opposition leader and so conveniently setting aside the laws.

Has Malaysia now become a circus ground for international embarrassment where sex is actively promoted as a weapon in the political war? Why is sex scandal supposed to be so shameful for a leader of the opposition and yet condoned when it involves leaders of the BN?

What did UMNO do when Datuk Chua Soi Lek got himself embroiled in the same scandal? Nothing! There was not demos to urge for an RCI. What happened also when Datuk Thamby Chik (one of the Datuk T trio) himself was scandalized in the same way involving an underaged girl or even a senior UMNO leader was allegedly caught in a hotel room with a famous singer? Nothing! They tried everything in the book to cover up the cases.

Obviously UMNO is desperate enough to do anything, including overlook the laws, to achieve it political ends. By the look of it UMNO is a real hypocrite, having a double standard for sex scandals, one rule for the opposition and another rule for the ruling elites.

And we need also to keep in mind that asking the king of the country to appoint an RCI to investigate the sex video is shameful, as if out king’s duty is to meddle into dirty sex cases. Costs for RCI should go into more substantial and weighty matters of national importance such as the longstanding matter of the illegal immigrants.

This is proof that UMNO is even willing to use illegals, like it did in the bombings of 1986, just to topple parties they feel are threats to UMNO. But then again, knowing how the UMNO’s political mind works, why should we be surprised?