BIBLE IS A RESTRICTED ITEM? 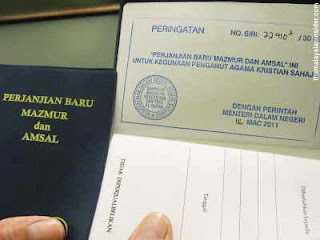 The other rectifications sought are:

1. To immediately apologize for it's callous act.

2. To return the Alkitab to the publisher and replace them with new Al-Kitab;

3. That no Al-Kitab be destroyed or further defaced;

4. That the government bear all costs and give written assurance that such desecration will never happen again;

5. That the Malaysian Home Ministry will not act on its own without due consultation with the relevant Christian representative organizations;

6. That due respect is given to the Al-Kitab by consulting the relevant Christian representative organizations before any external text is inserted in the Bible; and

7. That 30,000 Malay bibles worth RM78,000 imported by the Sarawak branch of global Christian group, The Gideons, be unconditionally released from Kuching port.

COMC spokesman, Ronnie Klassen clarified this during a press conference held here, after a police report was made at the Petaling Jaya, Section 8, Police Station.

The police report was aimed chiefly to demand for a thorough investigation into the said episode, so as to determine the true rationale behind such an act which the Group considered a gross travesty of the Constitutional guarantee of religious freedom of the Christian community in Malaysia.

“We do not accept conditions that belittle Christian faith and religion and which contravene Article 11 of the Malaysian constitution. We will not accept Muslim views on Christianity and its practice and matters of faith as normative, or link the Alkitab row to the Catholic Church’s court case on the right to use ‘Allah’- the Arabic word for God in its newspaper. The Alkitab and the ‘Allah’ court case are separate issues; and the federal government has no right to ban the Alkitab under the law. Such developments as Christianity being singled out as a threat is unacceptable, as there are no such conditions imposed on the holy books of other religions, including Islam. The Coalition of Malaysian Christians (COMC) seek a just an amicable solution to this matter.

“As Christians of both Protestant and Catholic persuasions, we wish to register our deep hurt and outrage at the Malaysian Home Ministry’s action of desecration of over 5,100 copies of the Al-Kitab (Bible) stamped with serial numbers, government seals and warnings that the books are meant for Christians only. 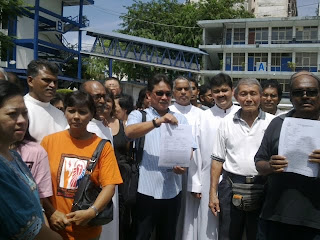 “We view this as violation of Article 11 of the Malaysian Constitution and the enshrined rights of Malaysian Christians to practice their faith without restriction. This is the first time in Malaysian history that Scriptures of Christians have been deemed illegal and a security threat,” Klassen articulated.

On the stamping of the confiscated Bibles, Klassen said the Group detested the Home Minister Dato Seri Hishammuddin Tun Hussein’s response, that such was standard practice and not meant to deface the books.

“We find his statement to be incorrect, untrue and misleading. The Christian community and its representative bodies have never agreed to any wording to be endorsed on Bibles to say that it is only meant for Christians. It is an escalation, interference and subjugation of Malaysian Christians and their right to conduct religious education and worship freely,” he contended.

“The latest letter from the Ministry of Home Affairs dated 15 March 2011 is therefore a set of new conditions imposed on the release of the impounded Bibles which is wholly unacceptable to us. This means that the Bahasa Malaysia Bible is now treated as a restricted item, and made subject to the control of the Malaysian Home Ministry and government. This is wholly offensive to Malaysian Christians,” he stressed.

“Any person who respects the Holy Scriptures of any religion would be appalled by such action,” he added.

Ronnie stated that "the Malaysian Christian community has always acted in good faith and with great patience to find amicable solutions without compromising their fundamental beliefs, and regretted that such good faith has not been reciprocated by the Government.

"It is the government that has moved the goal posts over the years through a systematic imposition of unreasonable conditions and restrictions. Christians are horrified by the arrogance of the Home Ministry and its officials and the contemptuous act of defacing the Alkitab is sacrilege,” he concluded.