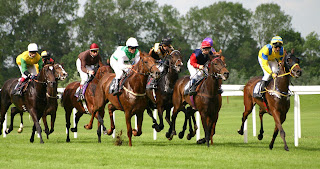 THe Royal Sabah Turf Club (RSTC) race meetings this weekend are expected to be exciting as it will feature a carry forward four-forecast pool totaling RM31,608 and a thoroughbred race with newly-arrived horses.

“Seventeen ponies had been handicapped under starters order for Race 5 for the Mesapol handicap so this is not going to be an easy race,” he said.

“Based on the entries there is no clear favourite and one could never be overconfident because a slight miscalculation might see an upset on the cards,” he said.

On Sunday, he said horse racing enthusiasts would be treated to a 1,200m thoroughbred race where 10 entries had been handicapped with three of them newcomer from Kuala Lumpur and Singapore.

Running with them for the first time are Xaar’s Honour, a seasoned runner in the Malaysia Racing Association (MRA) circuit in the peninsula that had just arrived here and two horses from Singapore, Borneo Holiday (Ex-Viking Power) and Hurricane Borneo (Ex-Lucky Vagabond).

“As we have seen in previous thoroughbred races in Tambalang, anything could happen as horses are just like sports car … whoever is fine-tuned on that day will most likely take the honours,” he said.

The RSTC committee was also confident of a huge turnout as in previous thoroughbred races.

Lim went on to note that the RSTC committee had endorsed several changes in its regulations such as allowing Class 6B ponies to be demoted to Class 7 Division 1 after being unplaced in three consecutive meetings over 1,000m and 1,200m race which are strictly for ponies that were promoted from Class 7 div. 1 only.

Another change was the maximum weight of 63 kilo for Class 1 ponies, which had been relinquished, hence there would no ceiling weight for winning ponies from now on, he said.

Lim said the changes were decided by the Racing Committee and endorsed by the RSTC committee recently.