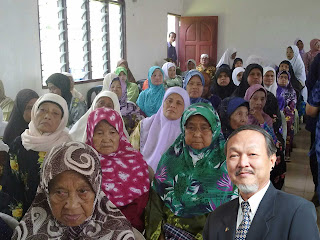 THE Assistant Minister of Women, Family and Community Development Heng Sai Kie in answering in Parliament on the question asked by the DAP Member of Parliament for Kota Malacca Sim Tong Him on the total number of single-mother from each state who had applied for assistance from the ministry during 2010, and the type of assistance available for them.

Heng said there are various scheme set up the ministry (KPWKM) through the Welfare Department Malaysia (Jabatan Kebajikan Masysrakat, JKM) to cater for the need of the poor and needy which includes the single-mother too.

Special Aids (BA) is a scheme for the poor and the single-mother to help them financially on a temporary basis with a certain time frame until they are financially stable and capable. This amount varies from state to state. During 2010, a total of 25,587 single-mother had benefited under the BA scheme through JKM with a sum of RM51,511,114.00 being utilized. The lowest record is in Labuan with only 70 cases and RM134,600 was used.

The DAP Kota Kinabalu Member of Parliament Hiew King Cheu later received the details from the Assistant Minister Heng in Parliament, and had discussed with her concerning that there are many cases of the single-mother who has yet to know on how to apply for the various assistance and grant available for them. She said they should approach the Welfare department for further information and seek help from the officers there.

Hiew said he has received many request for help from single-mothers in Sabah who need help in many ways. Many did not know how to apply, but Hiew said they can always see him for help. To qualify for applying the financial assistance, the monthly income should not be more than RM830.00.