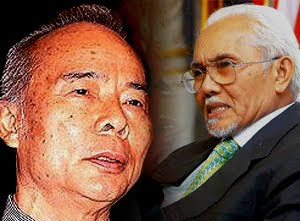 “Keeping him is not an option if we want to recapture the moral high ground,” he said when commenting on Taib’s decision on Saturday to stay on in the post and lead the ruling Barisan Nasional (BN) in the state polls next month.

Sipaun said that Taib should stay out from the fray and be grateful that he has not so far been brought to public account over his three decades in power.

“By refusing to make way, Taib is taking advantage of the chronic poverty and high illiteracy rate among the majority of Sarawakians,” Sipaun said last night on Taib’s recalcitrance despite his irrelevance.

“The people of Sarawak are not in a position to make informed choices.”

Sipaun, a former Sabah state secretary, was commenting on weekend reports that Taib will dissolve the state assembly on Wednesday and lead the Sarawak BN’s bid for a new five-year term.

Sipaun noted the continuing weakness among the poor masses to take the few ringgit offered to them by the powers that be for their votes.

He describes this as the classic dependency syndrome which also includes the subsidy regime and being at the mercy of legislators on the government side, among others.

Sipaun, also one of the 12 appointed by the Yang di-Pertuan Agong as a Malaysian Anti-Corruption Commission (MACC) adviser, faults the mainstream media for clearly being in cahoots with the Sarawak government to downplay or omit reports on misdeeds involving Taib, his family, relatives, friends, cronies and BN leaders.

Instead, he said, the mainstream media “is noted for self-censorship”. The right approach, he added, would be to collectively push the boundaries of press freedom.

“People like Taib will not last even a minute in office in any nation that subscribes to the rule of law,” said Sipaun. “They would be hounded out of office by the press and brought to account by the law enforcement authorities.”

He said that the mainstream media has ignored the fact that Taib, in any functioning democracy, would be seen as a great liability “and therefore someone not to be fawned over as dispensing pearls of wisdom”.

It’s a failure of “our democratic system’, said Sipaun, when politicians like Taib can act with impunity while those in the opposition get the book thrown at them for a few ringgit.

He noted that a mountain of circumstantial and documentary evidence has been swirling around Taib’s head in recent months.

This, according to him, paints a definite pattern of conflict of interest and abuse of power, corruption and nepotism stretching back over three decades of his rule.

He cited the case of Taib’s daughter-in-law, Shahnaz Majid, filing documents in the Syariah Court in Kuala Lumpur last month against Mahmud Bekir Abdul Taib, her estranged husband. These documents ask for half of the thousands of hectares of land that Mahmud Bekir evidently owns in Sarawak, RM400 million and a share of other assets, he noted.

“This is the tip of the iceberg,” said Sipaun. “These documents back up other reports in the alternate and international media detailing the Taib family’s fabulous wealth in Sarawak and many locations abroad.”

However, he doesn’t foresee any move to trace and recover assets unlawfully accumulated by Taib and other politicians while in public office. It could be easily done under existing laws in co-operation with the international community, said Sipaun, “but it won’t be done for political and other reasons”.

Asked about Taib’s ambiguous statement that he would step down in mid-term after bringing in a suitable successor and ensuring stability, he begs to differ.

It’s not a question of stepping down at all, said Sipaun, but the issue of whether he should stay on for the polls “since he has lost all legitimacy”.

“A person who is clearly not fit to be chief minister should not be talking about grooming someone suitable to step into his shoes,” said Sipaun. “There’s no logic at all in such an approach.”

Sipaun’s worse nightmare is that Sarawakians would not have heard the last of Taib even if he steps down in mid-term as indicated. He fears that Taib would emulate his immediate predecessor and maternal uncle Abdul Rahman Ya’kub and kick himself upstairs to be the governor after installing yet another family member as the chief minister.