TIME FOR SABAH STATE GOVT TO MAKE A STAND! 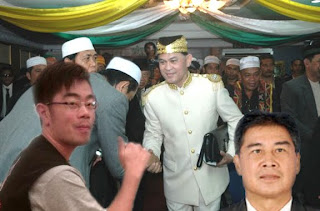 "MP Ranau has represented the Sabahan voice and told the federal government what Sabahan agonies are," Junz said.

MP Ranau has asked the Federal Government to state its stand on Sabah 3 major current issues in the last monday's Dewam Rakyat sitting. These issues are the Sultan of Sulu mysterious issue, illegal immigrant and last but not least the issuance of Malaysian Identity Cards (ICs) to illegal immigrants.

He has successfully highlighted these urgent issues, his people's angers and frustrations towards the government to the main stream media in the parliament. "I, on my personal capacity, salute Datuk Siringan." said Junz.

DAP Sabah would like to see the same bravery displayed by Courageous Datuk Siringan in the Sabah State Government. It is time now for Sabah state government to make a stand and explain to Sabahan whether the government is supporting the set up of Royal Commission of Inquiry (RCI) for Illegal Immigrant issue as well as the Akjan issue.

For once, can all our Sabah state leaders pass a firm motion collectively through the body of Sabah government to demand Federal Government to grant our wish to set up the Royal Commission of Inquiry.

Many of our leaders have voiced out even from BN component parties but Home Minister Hisham has continued to turn to a deaf ear. If Sabah government demands it, we believe Prime Minister, Dato Seri Najib carrying the slogan of the people first performance first, will surely agree to our request.