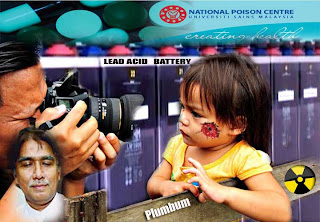 LEAD Is A Natural Constituent Of the earth's crust. It may be found in drinking water, soil and vegetation. The most common lead sources are those that settle in soil and water. Due to its properties, it has been used for myriad purposes which are considered to be not intrinsically dangerous.

However it can enter and re-enter the human environment in potentially hazardous form when it is incorrectly applied or removed. This could occur in the burning of storage battery casings, improper use of ceramics glazes and burning or sanding of old leaded paint.

As combustion of leaded gasoline may also constribute to the external sources of lead, the recent `Use Unleaded Fuel' campaign seems to be a good measure to curb disposition of lead into the atmosphere.

Lead has no biological value in human body even in trace amounts. It displaces other metal from the normal binding sites of cells to produce various biochemical effects. Thus, the ideal whole blood lead level is 0 pg/dL.

Until recently, whole blood lead levels as high as 30 pg/dL were considered acceptable. However, disturbances in biochemical functions are demonstrable at concentrations below that figure. From prospective studies, it is obvious that a level between 10-15 pg/dL and above may impair the psychomotor development of young children.

Why are children more prone and susceptible to lead poisoning? Children run the greatest risk being poisoned because lead is easily incorporated into their growing bodies. Its accumulation in growing bodies could distrupt the normal growth pattern of cells. Even without direct contact to enviromental lead, unborn child can be affected.

A pregnant woman that has been exposed to enough lead tends to have a high lead storage in her bones. The metabolic changes which occur in the body during pregnancy may cause the stored lead to be released into the blood, thus exposing the unborn. At this critical stage of foetal development, the most likely system to be disrupted is the neurogical system of the developing unborn child.

Young children are the most widely exposed group due to their "hand-to-mouth" attitude since they tend to put almost anything into their mouths. Children absorb a higher percent of ingested lead than adults do.

In the adult, 10% of an administered dose is absorbed. In the child, it is estimated that 50% of ingested lead is absorbed and that absorption is further enhanced if the child is malnourished. Thus, when a child is exposed to the same amount of lead as that exposed to an adult, the potential damage is even greater.

Over the years, lead has appeared to be still a significant health hazard to children. Most people, including children, are exposed to lead that has been dispersed in air, dust and soil by natural or external sources. Other low sources of lead that may be damaging to children may also appear in food and drinking water.

Children are exposed to lead in drinking water primarily from contamination of the water supply system such as from lead pipes or from leachable lead solder. Children are also at risk of ingesting lead-based paint as well as lead-bearing soil and house-dust contamination by the deterioration of lead-based paint. Dust and soil in children's play areas that are contaminated principally by automotive exhaust and deterioration of old lead paint may contribute to the intermediate dose exposure of lead.

Lead concentration in urban soil and air is often much higher than in rural areas. In more polluted areas where lead content of dust is much higher, it is often associated with a significant elevation in children's blood lead levels.

When dust and soil are the only sources of exposure to lead, symptoms of lead poisoning are rarely encountered. In this situation, accumulation of smaller amount of lead for a long period of time in a child's body may result in damage that does not become visible until the child is old enough to express learning abilities.

At high level of exposure, the concentration of lead is sufficient to produce acute and potentially fatal illness.

The lead dust that form from lead-based paint chips are the most detrimental towards children. This lead can get on carpets, floors, furnitures, toys and other objects as well as on the hand of children and adults in the home. As children are most confined to the house compound, they are most susceptible to lead exposure.

Additional lead sources may also come from other activities in the home. These may include pottery and ceramic glazing and re-painting activities. Precautionary measures must be practised when removing of lead-based paint from older houses during renovation. Pregnant women, infants and children should be kept-away from the house until the deleading is completed and clean-up has been accomplished.

Another source of lead is improperly soldered cans, particularly those containing acidic food stuff. Food should not be heated in such cans as heating increases the dissolution of lead.

Domestic burning of lead-painted wood and newspaper also cause additional hazard to the enviroment. It was found that the amount of lead in a sample of ash from burning of black-ink newsprint was less than 5mg/kg while a sample of ash from burnt colored-ink newsprint was approximately 58mg/kg. In order to minimise this hazard, re-cycling is always recommended.

Briefly, the sources of lead disposition in the environment can be summarised as below:

- dust particles containing lead in the air, water and food.

- water that has been excessively boiled or stored in lead based kettles.

Unfortunately, the list may seems endless. However, blaming certain quarters in the community for not doing enough in controlling this environmental issue is taking the easy way out and `finger-pointing' is not always the best solution. Ignorance often spells disaster and tragedy. Thus, it is better to be well-informed about it and do something positive rather than to have one's mind doggedly closed to it.

In our next issue we will be discussing more on the toxic effects of lead in children and its relationship with IQ.