WHY IS LDP SO DEMANDING? 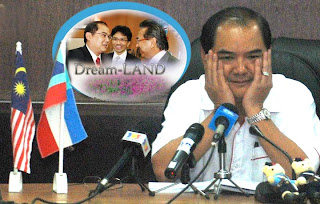 THE political scenario is really in a dynamic environment for making Sabah into a better state. After the march 2008 general election, Sabah voting trend for BN is considerable strong and in the whole country generally the Chinese voting trend were seen as Pro -opposition.

One might want to ask why chinese are more likely to oppose against the government? Are they too well off to do it? Or are they living in proverty as comparing to those native bumiputra? Everybody is entitle for their own answer .

But the way I look at it. Many of our native bumiputra who are living in the interior are generally living a harder life than us. In Lahad Datu, native frisherman was reported eaten by crocodile for trawling shrimps in the river and have we ever heard of news that Chinese fisherman eaten by croc in Sabah?

Apparently, we can see that our native ‘bumiputera’ are obviously living a harder life and yet majority of them are supportive to the ruling government. I believe they must have understood the concept of peace, harmony and a stable government will eventually bring better development and a better quality of life to them.

Now we look at our Chinese chapter of how they handle a situation in the development of our state. LDP is quoted as an example here. Time have changed political environment when SAPP left BN after the March 2008 general election, LDP was doing well, became arrogant, some senior leaders become egoistic, claiming to be the hero for the Chinese community for winning 3 state seats and I MP seat.

They behave like the whole highway belongs to them, they talk like their party won the 100% seats allocated to them, was the 100% effort of LDP, like as if without LDP, BN was unable to gain this victory.

A sudden ‘Mazu’ issue turned out a sour relationship when LDP deputy president Datuk Chin Su Phin declared his party was no longer able to work with the chief minister who is also the Sabah BN Chairman.

The main reason why Datuk Peter Pang leave the former party was because he is a strong BN Supporter, which is obvious enough for him not to stay on with LDP, a party which is unable to work with the Chief Minister and also the state BN Chairman.

LDP making noise claiming that the CM was not fair to them, then if the answer is true, why in the first place LDP was allocated a DCM post and a full minister post for the youth and Sports.

In contrast, if we still think the CM is unfair to LDP, then is it fair to ask Datuk Peter Pang En Yin who have joined Gerakan, a Chinese base national party to be dropped from his present Deputy Chief Minister post?

Is it wrong for a Sabahan leader run the show of a national party in Sabah? As we can see how LDP singing the same song that the opposition SAPP is singing by differentiating local parties and west Malaysia parties.

I have a strong feeling that LDP are implicating to Sabah voters to reject the west Malaysia parties including UMNO.

LDP always claim to be the hero of our Chinese community but they have forgotten only through a close relationship and close teamwork among leaders in BN can bring benefits to our Chinese Community in term of education, social, culture and economic development.

We must not forget only through good relationship with a non confrontational approach can we strengthen our political will to resolve problems face by our community. A confrontation approach is always a negative one, this can never bring in anything to us. History had thought us by looking at PBS in the 1980's to 1990's.

I strongly believe that Datuk Peter Pang En Yin undoubtly fully understood the positive non-confrontational approach and he is on the right track to serve the Chinese community.